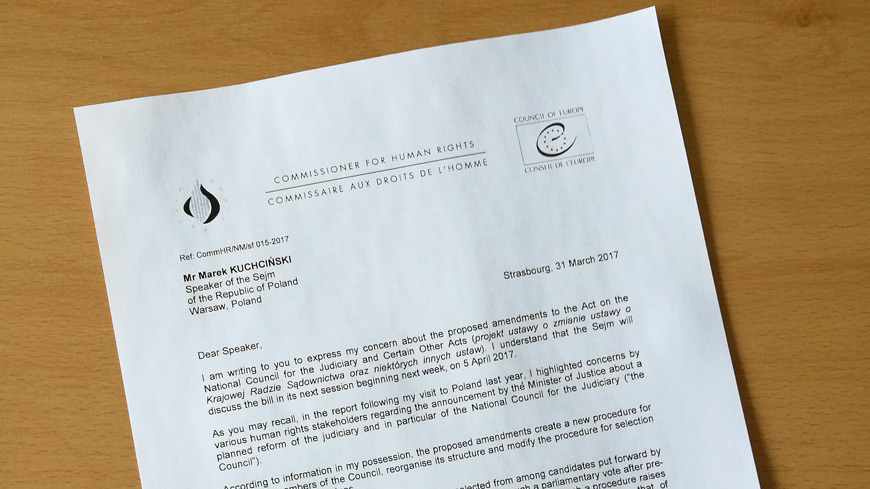 In a letter addressed to the Speaker of Sejm of Poland published today, the Commissioner calls on the Polish Parliament to reject the amendments to the Act on the National Council for the Judiciary because they would encroach upon the independence of the judiciary.

By giving Parliament the authority to select the judges who sit on the National Council for the Judiciary, the amendments would provide the executive and legislative powers with a decisive role in the appointment of judges in Poland. The proposed new law also foresees the premature expiry of the term of office of the current members of the National Council for the Judiciary. In the Commissioner’s view, these proposals run counter to the well-established constitutional principles of the separation of powers and judicial independence – which are also enshrined in the Polish Constitution - and the international human rights obligations by which Poland is bound.

“In order to preserve the principles of the separation of powers and the independence of the judiciary, the selection of members of the judiciary should be a decision process wholly independent of the government, so as to stave off the risk of any undue political influence. By entrusting the legislature with the task of appointing members to the National Council for the Judiciary and by affording the legislative and executive branches the power to exercise decisive control over the selection of judges and trainee-judges, the proposed amendments infringe on the independence of a body which is the constitutional guarantor of judicial independence in Poland”, writes the Commissioner in the letter.