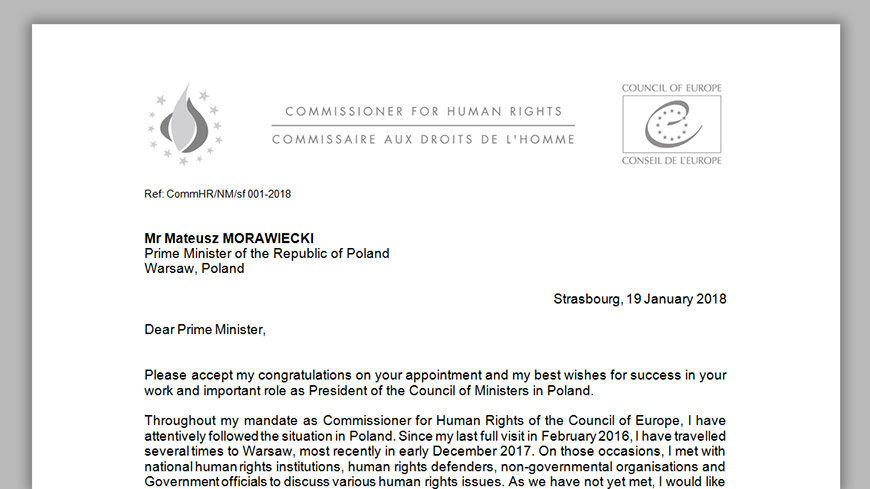 In a letter addressed to the Prime Minister of Poland, Mr Mateusz Morawiecki, published today, the Commissioner raises concerns over recent developments affecting the independence of the judiciary; women’s access to sexual and reproductive rights; the deteriorating environment for NGOs active in the area of women’s rights and assistance to victims of domestic violence; and attacks against the independence and effectiveness of the Ombudsman.

Commissioner Muižnieks stresses that recently-adopted laws – in particular, the amendments to the Act on the National Council of the Judiciary and to the Act on the Supreme Court – further compromise judicial independence in Poland, and asks for clarifications on how the authorities intend to apply the new provisions in practice.

Regarding women’s rights, the Commissioner regrets that new barriers are being created to hinder women’s access to comprehensive sexuality education, emergency contraception and abortion care. He urges the authorities to repeal any retrogressive laws and to reject any legislative or policy proposals which would weaken women’s sexual and reproductive health and rights.

Furthermore, the Commissioner warns that police searches of NGOs may have a dangerous chilling effect for their work. He recommends ensuring an enabling environment for NGOs, as required by the Council of Europe Convention on preventing and combating violence against women and domestic violence that Poland ratified in 2015.

Lastly, the Commissioner urges the authorities to respect the independence and ensure the effectiveness of the Ombudsman’s institution and of its office holder.