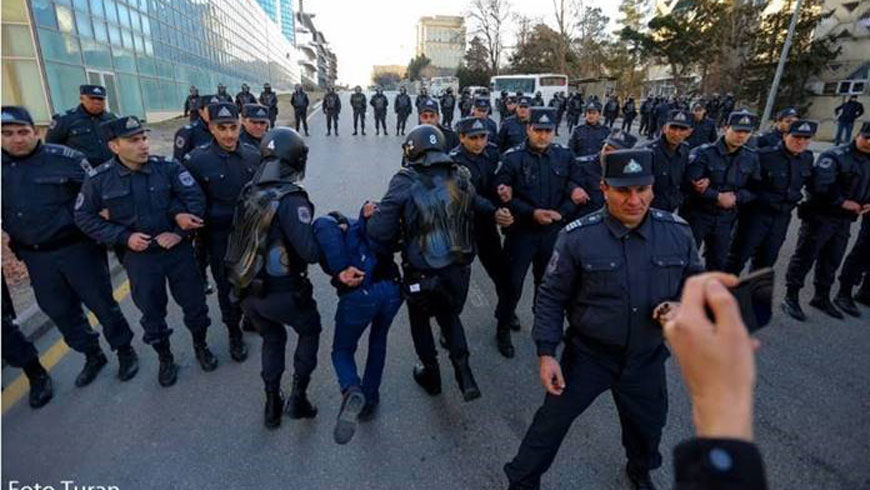 Police detain a protester and remove him from the scene of the protest on 16 February 2020 in front of the Central Election Committee. Photo: Turan.

Commissioner Mijatović published today a letter she addressed to the Minister of Internal Affairs of Azerbaijan, Mr Vilayat Eyvazov, in which she raises concerns in relation to the dispersal of demonstrators in recent protests in Baku and limitations imposed on freedom of assembly in that context.

The Commissioner is concerned in particular about the banning of all forms of peaceful protest in the centre of Baku; the excessive use of force against demonstrators by law enforcement officials during the dispersal of demonstrations which still go ahead,; the arrests and convictions to administrative fines and detentions of protesters; as well as the allegations of mistreatment of journalists covering the protests by law enforcement officials.

The Commissioner observes that the authorities continue to interpret  the Azerbaijani legislation on assemblies as requiring prior permission to hold such gatherings. She also stresses that peaceful protesters should not be sanctioned for the mere fact of being present at and actively participating in a demonstration and calls on the authorities to effectively investigate all cases of injuries that peaceful protesters and journalists reportedly sustained as a result of force used by law enforcement officials.

She concludes by requesting information on measures taken to verify the lawfulness of the arrests and to investigate the allegations of physical ill-treatment and other forms of abuse of participants in protests.