Commissioner calls on the Bulgarian Parliament to ratify the Istanbul Convention 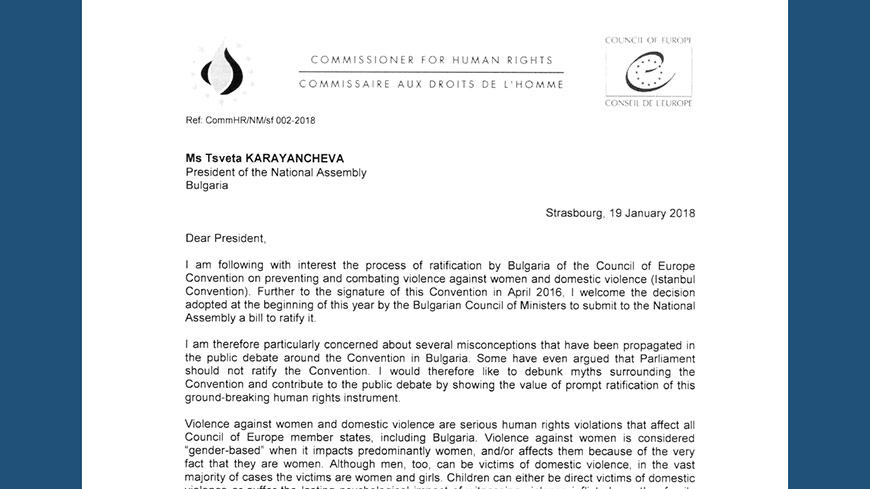 In a letter addressed to the President of the Parliament of Bulgaria published today, Commissioner Muižnieks urged Bulgaria to move quickly forward on its path towards the ratification of the Council of Europe Convention on preventing and combating violence against women and domestic violence (Istanbul Convention).

He also stressed the importance of eliminating misconceptions about this Convention in public discourse in Bulgaria, in particular concerning the use of the term “gender”. “These myths should be debunked” writes the Commissioner. “Some critics may acknowledge that violence against women is a problem, but wish to prevent governments from challenging traditional gender roles and stereotypes, due to a cultural affirmation that men and women should play very different roles in public life and within the family. This approach limits women to the stereotypical role of mothers, giving birth and staying at home to rear children. The critics go as far as to argue that the Convention would endanger societies based on traditional families. This is a false argument because all the measures provided for by the Istanbul Convention reinforce family foundations and links by preventing and combating the main cause of destruction of families, that is, violence”.

The Convention is all about preventing violence against women and domestic violence, protecting the victims and prosecuting the perpetrators. It has no other hidden purposes or effects. “I therefore urge the Bulgarian Parliament to ratify the Convention as soon as possible and promote a more objective debate so as to facilitate public awareness and policies able to foster the implementation of the Convention”, concludes the Commissioner.