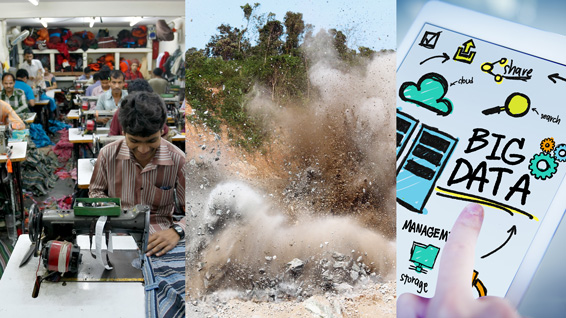 The effects of business practices on human rights have become a central issue for human rights protection. For a long time already, concerns have been raised about malpractices related to labour rights, health and safety at work and the use of child labour by some business enterprises. Later on, the outsourcing and privatisation of essential services previously carried out by public authorities ranging from security to education and child protection have raised issues about the preservation of human rights duties and accountability. More recently, the right to privacy and freedom of expression have become major themes with reference to private companies which control and operate on the Internet and the wider digital environment, questions which were highlighted in a research paper on the rule of law on the Internet my Office published in 2014.

While states remain the ultimate duty bearers for the protection of human rights, there is now wide recognition that businesses should also respect human rights. Some multinational enterprises have become so powerful that they can surpass the financial resources available to middle-sized states. A recent survey carried out by the The Economist highlighted the fact that many businesses have actually started to view themselves as important actors in respecting human rights. This is partly the result of intensive international and national efforts to clarify the human rights responsibilities of the business world.

In 2011, the UN Human Rights Council unanimously endorsed the Guiding Principles on Business and Human Rights (hereafter “the Guiding Principles”). These principles spell out the UN “Protect, Respect and Remedy” Framework developed by John Ruggie, at the time the Special Representative of the UN Secretary-General on the issue of human rights and transnational corporations and other business enterprises. The Guiding Principles are based on three pillars: the state duty to protect human rights, the corporate responsibility to respect human rights, and the right of victims to access an effective remedy. They are the first global standard for preventing and addressing the risk of adverse impacts on human rights linked to business activity. The Guiding Principles do not create new legal obligations, rather they elaborate on the implications of existing obligations and practices for states and business.

The state has the duty to protect individuals within its territory or jurisdiction against human rights abuses committed by non-state actors, including business. Although states are not responsible for human rights abuses by private actors, they must take steps to prevent, punish and redress such abuses through legislation and regulation. The Guiding Principles also affirm that business enterprises have an independent responsibility to respect human rights which is distinct from state obligations. The corporate responsibility for human rights includes the “Do no harm” principle that makes it necessary to carry out due diligence in identifying and addressing the human rights impacts of business practices. Companies need to take all necessary and reasonable precautions to prevent harm.

Access to remedy by individuals and groups of people is a critical element of the framework. While states are required to take appropriate steps to investigate, punish and redress, there is also a corporate responsibility to set up complaint mechanisms at the company level to provide early warning and resolve grievances before they escalate. States have a particular duty to ensure access to judicial and non-judicial mechanisms for effective remedies. Non-judicial mechanisms may include labour tribunals, ombudspersons, national human rights commissions and equality bodies, for example.

The Guiding Principles have gained wide acceptance around the world. In Europe, the Council of Europe Committee of Ministers welcomed the principles in a Declaration in 2014 and expressed strong support for their implementation by member states. On 2 March 2016, the Committee of Ministers adopted a detailed Recommendation on human rights and business. The Recommendation builds on the Guiding Principles and provides more specific guidance to assist European governments in preventing and remedying human rights violations by business enterprises while insisting on measures to induce business to respect human rights. It spells out the relevance of the European Convention on Human Rights and the European Social Charter in this area. In particular, the Recommendation elaborates on access to judicial remedy drawing on Council of Europe expertise and legal standards in the fields of civil and criminal liability, reduction of judicial barriers, legal aid, and collective claims.

The European Union has recognised the Guiding Principles as “the authoritative policy framework” in addressing corporate social responsibility. Since 2011, the European Commission has been encouraging EU member states to develop national action plans (NAPs) for implementing the Guiding Principles. In its Recommendation, the Council of Europe Committee of Ministers also urged member states to develop and adopt NAPs. In addition, the Committee of Ministers intends to share NAPs and good practices in this area through an information system to be maintained by the Council of Europe.

Nine European countries have already published NAPs on business and human rights: Finland, Denmark, Italy, Lithuania, the Netherlands, Norway, Spain, Sweden, and the United Kingdom. Nine further NAPs are on the way in Azerbaijan, Belgium, Czech Republic, Germany, Greece, Ireland, Portugal, Slovenia and Switzerland. The UN Working Group on Business and Human Rights has published guidance on the development of a NAP.

The Working Group defines a NAP as a policy strategy developed by a state to protect against adverse human rights impacts by business enterprises. The NAP needs to reflect the state’s duties under international human rights law, including the principle of non-discrimination, to promote business respect for human rights through due diligence processes, and to provide effective access to remedy. The NAP should address the country’s actual and potential business-related human rights abuse by defining realistic measures for preventing and remedying such harm. An inclusive and transparent process involving relevant stakeholders is necessary in the development of a NAP and its regular review and revision.

NAPs on business and human rights belong to systematic human rights work at the national level   which I have often encouraged during my country visits. They are not simply documents but part of a continuous, inclusive and transparent process of implementing human rights. Experts have stressed the importance of establishing review and follow-up mechanisms to support states in producing, implementing and reporting on NAPs. In addition to facilitating the sharing of good practices about NAPs, the Recommendation of the Committee of Ministers envisages a stakeholder review of the implementation of the Recommendation within five years. This will provide a good opportunity for taking stock of the impact of NAPs in Europe.

Groups in need of additional protection

The Recommendation of the Committee of Ministers stresses the need to provide additional protection to workers, children, indigenous people and human rights defenders. Naturally, workers are directly affected by the activities of their companies. States have the duty to require business enterprises to respect the rights of workers. European and international human rights instruments are essential in ensuring workers’ freedom of association, their right to collective bargaining, the prohibition of discrimination, child and forced labour, and the protection of health and safety at work. The UN Committee on the Rights of the Child has given detailed guidance on state obligations regarding the impact of business on children's rights. It highlights the need for states to facilitate the access of children to remedies and for businesses to undertake child rights due diligence.

Indigenous peoples are often excluded from consultations on business activities that influence their lives which may result in further social and economic marginalisation. In particular, business enterprises should obtain the free and informed consent of indigenous peoples prior to the approval of projects which affect their lands, territories or other resources. Human rights defenders can face challenges and risks while holding companies accountable. States have an obligation to promote an environment that is safe and enabling for human rights defenders. Companies should consult them about the possible impacts of business activities on human rights and refrain from obstructing their work.

It is encouraging that businesses themselves are becoming more aware of the impact of their activities on human rights. In addition to simply avoiding harmful effects, it will be useful to highlight the potential of business enterprises to promote human rights in their operations, for example in the field of non-discrimination. The involvement of all stakeholders in the adoption and implementation of NAPs on business and human rights can further accelerate this process. National human rights institutions also have a role to play. The Danish Institute for Human Rights has already co-authored a toolkit for the preparation of NAPs and prepared a specific toolbox for the human rights impact assessment of business projects.

Experience in the implementation of NAPs will provide valuable elements for on-going UN efforts to draft a legally binding human rights instrument to regulate the activities of transnational corporations and other business enterprises. It is likely that the instrument will take a long time to conclude but that should not discourage the active implementation of existing international and regional standards on business and human rights, also in the form of NAPs. Business enterprises have an increasing role in promoting human rights and this responsibility should be recognised by businesses and governments across Europe.