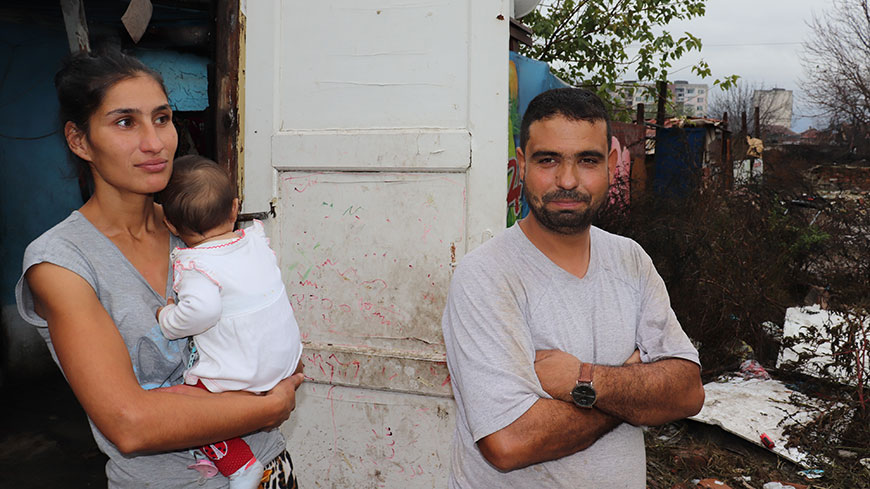 A Roma family who fled the village of Voyvodinovo, Bulgaria, during the anti-Roma protest in January 2019. ©Angelina Genova

“The government should step up its efforts to fight the hate speech prevailing today in Bulgaria in particular against Roma, LGBTI people and other minority groups” said the Council of Europe Commissioner for Human Rights, Dunja Mijatović, today after a 5-day visit to the country.

Hate speech and hostility against Roma persist, with little if any response from the authorities to counter this long-standing phenomenon. “The lack of reaction to some very serious instances of hate speech by some high-level politicians, which systematically go unsanctioned, is worrying.” The Commissioner deplored the situation of Roma who had to leave their homes earlier this year following anti-Roma rallies in several villages, including in Voyvodinovo where around 200 individuals left in fear. “Such disastrous events illustrate the highly detrimental impact that hate speech can have on the lives of people and communities. I call on the authorities to urgently address the situation of the persons affected,” she added.

“There is a need for a political and cultural shift as regards the treatment and image of minority groups in Bulgaria. Recognising racist motivation as an aggravating circumstance for all offences and implementing the judgments of the European Court of Human Rights, including those on forced evictions and the registration of associations of persons identifying as a minority are among the immediate steps which the government should take.” In addition, the Commissioner is concerned about the demonstrations organised by extremist groups and calls on the authorities to strongly and publicly condemn such manifestations.

“The public debates which started a few years ago around the ratification of the Istanbul Convention propagated disinformation and reasserted age-old stereotypes about gender roles in society. The withdrawal by the government of the Child Protection Strategy and the current debates on the possible delay of the entry into force of the recently adopted Law on Social Services follow the same line,” the Commissioner said. “The government should now confront these dangerous trends and raise public awareness about the need to improve the protection of victims of domestic violence and children.” The Commissioner strongly urges the authorities to reopen the debate on the ratification of the Istanbul Convention, adopt the Child Protection Strategy and ensure the timely and effective implementation of the Law on Social Services. The Commissioner visited the only crisis shelter for women victims of domestic violence currently operating in Sofia. “As a matter of urgency, the authorities should increase the number of shelters and other social services available to victims of domestic violence.” The Commissioner is also concerned by the climate of increased hostility against human rights defenders, in particular women’s and LGBTI rights activists.

Moreover, Commissioner Mijatović is alarmed by the continuous deterioration of media freedom in Bulgaria. Non-transparent media ownership, threats and harassment of journalists, and the use of defamation suits are chronic problems. In addition, political influence over media outlets severely undermines the credibility of the press. “This must stop. Citizens need a free, investigative and independent press in order to be able to participate more actively in the democratic fabric of society. Journalists should be free to play their crucial role without interference.”