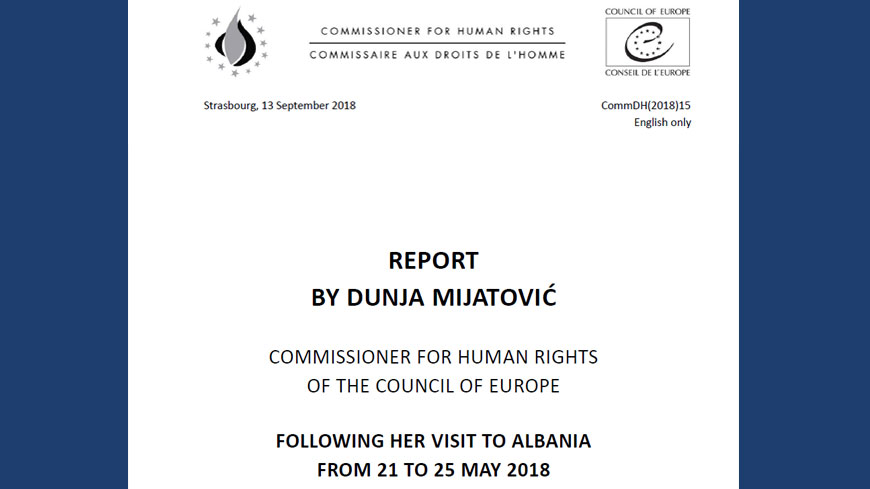 “The protection of children and inclusion of persons with disabilities has improved in Albania, but the authorities still have to address remaining shortcomings”, said today Dunja Mijatović, Council of Europe Commissioner for Human Rights, while releasing the report on her visit to the country carried out from 21 to 25 May 2018, which focused on children’s rights, the human rights of persons with disabilities and access to free legal aid.

Noting with satisfaction that Albania has banned all forms of violence against children - including corporal punishment - in all settings, the Commissioner remains concerned at the high rate of such violence that is still reported. “The authorities should tackle this problem in a more systematic and effective manner. To this end, they should adopt and implement a coordinated strategy; implement the recommendations of the Council of Europe Group of Experts on Action against Violence against Women and Domestic Violence; strengthen the capacities of child protection services and education professionals to identify and respond to violence; and promote positive and non-violent forms of child-rearing.”

Another matter of concern is that some 700 children still live in care institutions, sometimes for very long periods of time without clear prospects for leaving before they become adults. Underscoring that Council of Europe standards require that the placement of children in such institutions remains exceptional, Commissioner Mijatović recommends accelerating the deinstitutionalisation process and preventing the placement of children in state care, including by providing more support to families raising children and by developing an effective system of family-type services.

In order to ensure legal recognition to some 4 900 people who are stateless or at risk of statelessness in Albania - many of whom are Roma, including many children – the Commissioner calls on the authorities to address this issue in line with Albania’s human rights obligations, including by establishing a dedicated statelessness determination procedure. Albania is also urged to accede to the Council of Europe Convention for the Avoidance of Statelessness in relating to State succession.

As regards the protection and inclusion of persons with disabilities, the Commissioner recommends a better implementation of legislation, resolving structural problems in the social care system, and improving access to quality education and to employment. She also recommends drawing up and implementing a comprehensive plan to deinstitutionalise persons with intellectual or psychosocial disabilities and replace institutions with community-based services, providing the necessary protection and support to individuals and their families after they leave institutions and abstaining from any new placement of persons with disabilities in institutional settings.

Commissioner Mijatović also calls on the Albanian authorities to review the legislation that makes it possible to deprive persons with intellectual or psychosocial disabilities of their legal capacity and, as a consequence, of their civil and political rights. “The authorities should align domestic law and practice with UN standards and the case-law of the European Court of Human Rights” in order to ensure that these persons can exercise their legal rights and obligations on an equal basis with others in all aspects of life.

Lastly, the Commissioner welcomes the enactment of the law which broadens the category of persons benefiting from legal aid and calls on the authorities to step up their efforts in removing the obstacles vulnerable people still face in accessing justice.