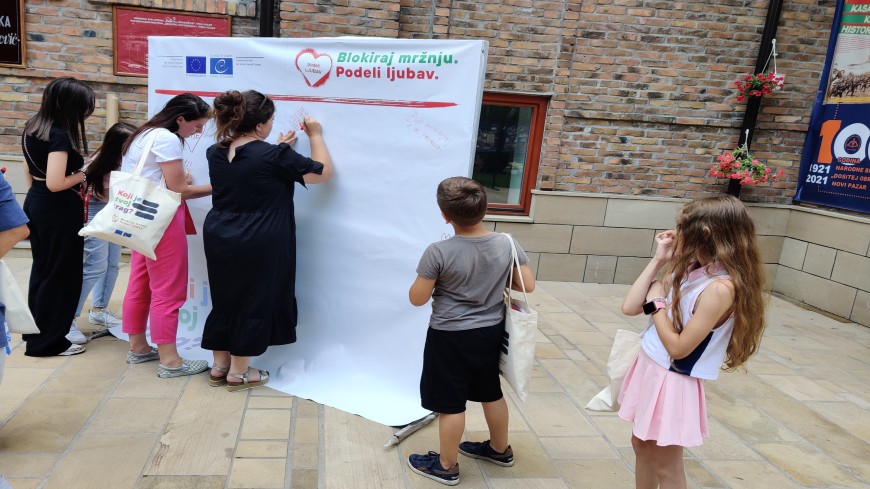 As part of the joint campaign of the European Union and the Council of Europe, “Block the hatred. Share the love!" a public discussion and a workshop were held in the premises of the Office for Youth in Novi Pazar on the topic of hate speech on social networks.

The "Block the hatred. Share the love!” campaign aims to combat various forms of hate speech directed at certain communities and individuals in Serbia, especially those of vulnerable and minority groups. The Internet allows for free expression of opinions, but it creates the false impression that comments do not leave traces, while, on the contrary, they will stay forever. In the online world, anyone can become a victim of hate speech, regardless of social status, age, and gender. Hate speech most often affects vulnerable groups such as women, minorities, and people with disabilities.

Actors and campaign ambassadors Miloš Timotijević and Slaven Došlo, as well as young European ambassadors Teodora Cekić and Adrijana Nikitović took part in the event. Member of the Mayor's cabinet in charge of education, prof. dr Rifat Redžović and the senior project officer of the Council of Europe Office in Belgrade, Ninoslav Mladenović, also took part in the events moderated by the president of NGO Monitor, Aleksandar Ivanović.

"Just because it comes through words, hate speech is no less than a personal attack, as it can have equally significant consequences. In words or images, online or offline, it is still a form of aggression and an unjustified act against human rights and dignity. Sadly, it is a daily reality around the world, and Serbia is not immune . Countering it requires strong joint efforts of institutions and individuals, and each and every of us can make a huge impact in this battle", said Ninoslav Mladenović, senior project officer of the Council of Europe.

The results of a research on this phenomenon on social networks conducted as part of the project were presented to the events participants.

Aleksandar Ivanović, president of NGO Montor that carried out the survey said: "The responses of young people from different regions of Serbia interviewed for the research showed that there were no significant differences in the knowledge of terms and forms of hate speech, but also in terms of the exposure of young people to hate speech on the Internet, no matter from which region of Serbia they were coming. Respondents from North, Southeast, and Southwest regions of Serbia were almost equally exposed to hate speech. Such results are hardly surprising, given that much of hate speech is spread via the Internet which is a global communication network. Another thing we have found in common among the respondents was their insufficient knowledge of legal frameworks and protection mechanisms."

After the opening speech and the presentation of the research, a walk was organised along the city promenade to the summer stage in the City Park, where messages against hate speech were written and exhibited.

„Novi Pazar is known as a city of young people, its distinctive features are a multitude of cultures and religions, as well as tolerance. Opposing hate speech is a strategic determinant, a building block in the process of ensuring international respect and appreciation, and above all, mutual trust, which form the basis of a cohesive society. The nurturing and promotion of European values and the protection of human rights, including the rights to equality and human dignity, is something the won of Novi Pazar’s authorities pay special attention to,“ said prof. dr Rifat Redžović, member of the Mayor's cabinet in charge of education.

Miloš Timotijević, actor and campaign ambassador, explained: "All of you probably know very well that hatred begets hatred and that the only way to defeat hatred is love. Love-hate relationship seems terribly simple, but it's quite a complex topic. That's where the whole story is born, especially when the Internet and exchanges among young people come into play. When you are a young person - an extremely young person - socialisation is very important, because it means fitting into the environment, being among friends... When belonging to a certain group, being “in” means to be a hater of “others”, who are not “in”, then that is a big problem. That's why we need to make sure that love – not hate - becomes the “IN-factor”, we need to explain to young people that diversity is key, and makes the wealth of our planet. The value of multiculturalism, diversity and tolerance for “otherness” is something that we should be guided by in this campaign and in life," he said.

Slaven Došlo, actor and another campaign ambassador, said: "I am from Sombor, and my city is as rich in different nations and cultures, as Novi Pazar. When I was growing up and entering the adult life, I did not realise that being different can be subject to hate speech or exclusion. I've always seen differences as part of the human stories of diversity, the multicoloured threads in the tissue of the society that makes our life so interesting. After all, those differences between us encourage us to progress in our understanding of the world and our lives through the understanding of others. Currently, I see hate speech as quite problematic, especially in the digital world, and I think it has something to do with the feeling of anonymity and impunity on the Internet. In my opinion, we should return to those basic human values, and the only answer to hatred is love," shared Došlo.

Campaign „Block the hatred. Share the love!” is being implemented online, through social media pages (Facebook; Instagram; Twitter), as well as through public events. These activities involve prominent public figures, institutions, and activists, who promote diversity and equality in Serbia and the region through personal experiences, testimonies and exchange of good practices.

The campaign is implemented within the action “Promotion of diversity and equality in Serbia”, that is a part of joint European Union and Council of Europe programme "Horizontal Facility for the Western Balkans and Turkey 2019-2022". This programme supports key local actors and beneficiary institutions in Serbia and the Western Balkans in the fight against discrimination, hate speech and hate crimes directed against minorities, LGBTI people and other vulnerable groups of the Serbian society. 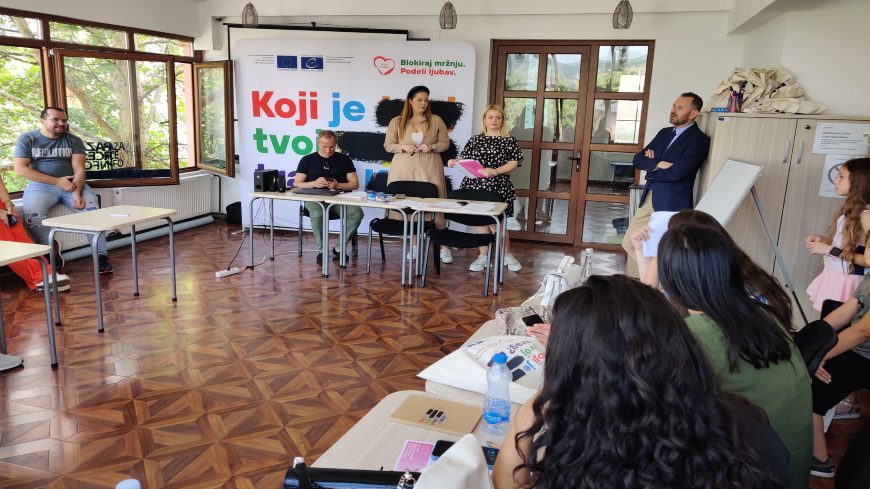