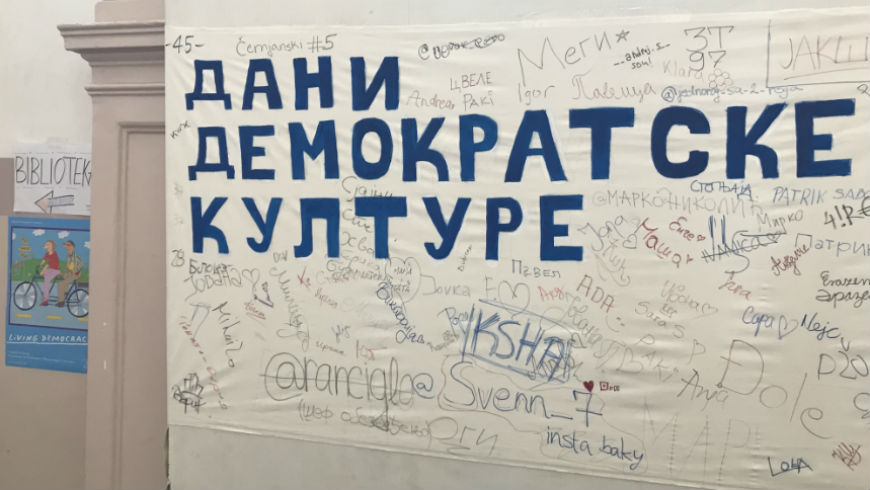 The first day of the school open days began with an introductory workshop after the arrival of international guests,  followed by a variety of structured events including workshops, debates, plenaries and plays.

The highlight of the open days was a round table event focused on student activism, respect and civic-mindedness, included students from secondary schools in Kranj (Slovenia), Varaždin (Croatia), Budapest (Hungary), Pljevlja (Montenegro), Ohrid ("The former Yugoslav Republic of Macedonia") and Užice, Kragujevac, Šabac and Novi Sad (Serbia). Teachers from the Zemunska Gimnazija school also participated; members of the students’ parliament acted as moderators. The activities and events that comprised the open days were attended by more than 600 participants from 6 different countries. More than 100 students from the pilot school, 31 from Belgrade secondary schools, associations of secondary school students, local municipality representatives, civil sector organisations, media, local community members, university teachers and other organisations carefully listened to debaters.

All agreed that such an important debate will contribute to further develop democratic culture in schools. Local municipality representatives commented that events of interest to all of society were of great significance and they would continue to support them.

"Zemunska gimnazija", one of the oldest secondary schools in Belgrade,  founded in 1858, is one of the pilot schools that has adopted competences for democratic culture and amended its curricular and extra-curricular activities accordingly. The Democratic school open days were organised as part of the European Union/Council of Europe Horizontal Facility project "Fostering a Democratic School Culture in Serbia".