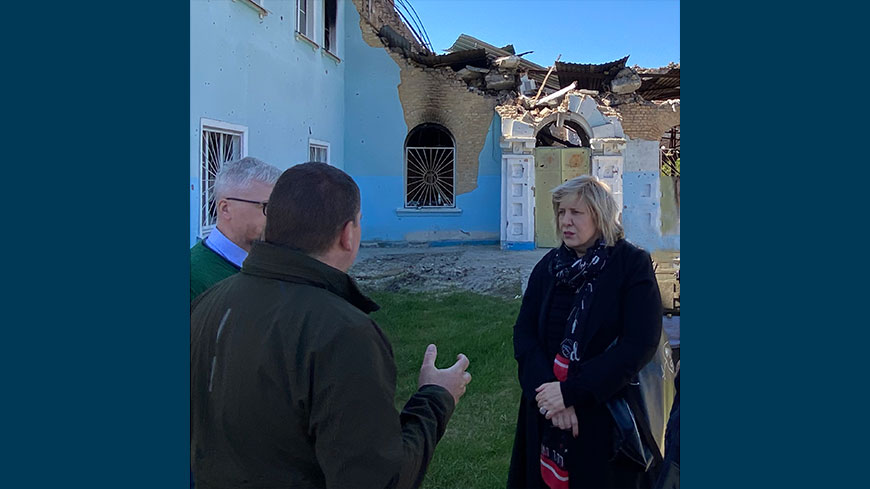 The Council of Europe Commissioner for Human Rights, Dunja Mijatović, published today a memorandum addressing the human rights consequences of the war in Ukraine. It aims to address some of the humanitarian and human rights consequences of the war and to highlight issues which require urgent action. It first outlines some of the patterns of violations of human rights and international humanitarian law identified by the Commissioner in her fact-finding and monitoring work, in particular her visit to areas of the Kyiv region which have been amongst those most affected by the war. It then focuses on the most vulnerable groups of persons and on the need to establish accountability for gross human rights violations and international crimes.

While most violations of the right to life were reportedly caused by Russian forces’ use of wide-impact explosive weapons, cluster munitions or unguided rockets in densely populated areas, Russian troops reportedly also engaged in extrajudicial killings by targeting or firing randomly on civilians. Some of the victims were allegedly tortured or ill-treated prior to being executed. In many areas, the attacks destroyed or damaged civilian infrastructure, including hospitals and schools, and cut off the supplies of electricity, gas, food, water and other basic necessities, trapping many civilians in desperate conditions. “The tremendous loss of human life and the scale of destruction defy comprehension,” said the Commissioner, calling for respect of international human rights law and international humanitarian law.

Hundreds of cases of enforced disappearance, abductions, incommunicado detention, or missing persons have been reported amongst human rights defenders, local officials, journalists, volunteers, civil society activists, veterans, or ordinary civilians, in areas of Ukraine under the control of Russian or Russian-controlled troops. There have also been some reported cases of possible enforced disappearance or abduction in the territory controlled by the Ukrainian government. “All persons who have been deprived of their liberty in an arbitrary manner should be immediately released, and all cases of enforced disappearance or arbitrary or incommunicado detention should be duly investigated and those responsible punished”, emphasised the Commissioner.

The Commissioner further received reports about the widespread practice of forcible transfer of Ukrainian citizens to non-government-controlled areas of Ukraine or to the territory of the Russian Federation, through the so-called ‘filtration’ process. This practice, which appears to carry many characteristics of the international crime of forcible transfer of population, should be promptly investigated. All humanitarian evacuations should be voluntary, safe, and informed. “I call on members of the international community to support any efforts which may assist Ukrainian citizens who have been transferred to the Russian Federation against their will”, said the Commissioner.

There have also been numerous reports of war-related sexual violence allegedly committed by Russian troops. While all such allegations should be duly investigated, “the priority should be now to create safe conditions for survivors, ensure their effective access to redress and justice, and prioritise the protection of their dignity and well-being”, stressed the Commissioner.

The situation of several categories of vulnerable persons requires special and urgent attention. The war and the ensuing destruction and insecurity has resulted in the violation of the right to life of hundreds of children as well as their ability to access healthcare and education. It has also had a particularly disproportionate impact on Ukraine’s older persons, especially women. Many of them have been unable or unwilling to evacuate to safety, and some reportedly lost their lives due to the spill over effects of the war, including the inability to access adequate medical care. Many persons with disabilities, including children, have allegedly been separated from support networks or left without proper care due to the war.

The war has displaced millions of Ukrainians, internally and externally. For many of them, the displacement resulted in a heightened risk of human trafficking, exploitation, and abuse. “The international community should continue to support people who fled the war as well as the countries and communities hosting them in the long-term, paying special attention to the needs of vulnerable groups”, stressed the Commissioner. Some of the local authorities in host countries are grappling with considerable difficulties in providing for the needs of both the displaced persons and their own residents. “If the basic needs of the people fleeing the war, such as housing, employment and education, are left unaddressed, this may add further stress on governments, displaced persons, and social cohesion.”

Multiple attacks on journalists and media workers covering the war in Ukraine have also been reported, with many killed or injured. Evidence suggests that some of those killed or injured may have been deliberately targeted by Russian forces. “Deliberate attacks against journalists are prohibited under international humanitarian law. They also prevent journalists from doing their work and undermine people’s right to information. Member states should provide more support to journalists covering the war in order to increase their safety and prosecute those responsible for crimes against them”, stressed the Commissioner.

The Commisioner reiterates the need to deliver justice to the victims of atrocities and emphasises that both the Russian Federation and Ukraine are under the obligation to investigate and prosecute the perpetrators of gross violations of human rights and grave breaches of international humanitarian law . Welcoming the actions taken by the Ukrainian authorities in advancing accountability for the grave international crimes which have been committed in Ukraine since February 2022, the Commissioner encourages them to move forward with the ongoing process of aligning the country’s legal framework  in this field with the relevant international standards.

Only the fair and impartial application of justice will serve the interests of victims and strengthen respect for human rights and international humanitarian law. “Delivering justice for all the victims of the war in Ukraine will require steadfast and long-term commitment of the actors involved, including through cooperation with the International Criminal Court and the continued provision of long-term support to the Ukrainian justice system.”