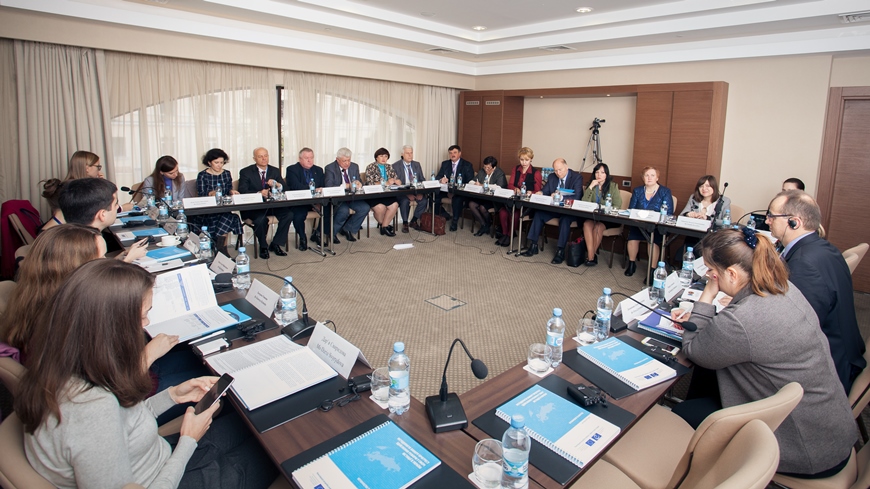 The first Round table on providing support to the National School of Judges of Ukraine (NSJ) in the implementation of the Progress Review Methodology (PRM) of the justice sector reform in Ukraine was held in Kyiv on October 27, 2017.

Opening the event, Deputy Head of the Council of Europe Office in Ukraine Ms Olena Lytvynenko and Vice-rector of the NSJ Mr Volodymyr Mazurok emphasized the necessity and timeliness of implementation of the monitoring of the progress and the effectiveness of the reform.

The Council of Europe’s international expert Mr Roderick Ackermann presented the approach to measuring the progress of the reform in Ukraine for the NSJ through the PRM tool in order to align NSJ operational activities to the international standards of work. Project manager of the Council of Europe’s Project “Consolidating Ukraine’s Justice Sector Reform” informed about further technical assistance planned by the Council of Europe in the field of justice sector reform in Ukraine in the context of monitoring the reform, that will be provided to the NSJ and other Ukrainian institutions involved in justice sector reform.

A special emphasis during the event was made on the fact that in case of a positive outcome, Ukraine will become the first country to carry out a systematic assessment and monitoring of the entire justice sector reform.

As a result of the event, participants outlined further working steps, in particular, the necessity of conducting additional workshops to revise and adapt the matrices, as well as indicators of PRM for the NSJ, and asked the Council of Europe to support this work.

The above mentioned event took place within the framework of the Council of Europe’s Project “Consolidating Ukraine’s Justice Sector Reform”.
2017-11-03T07:35:00