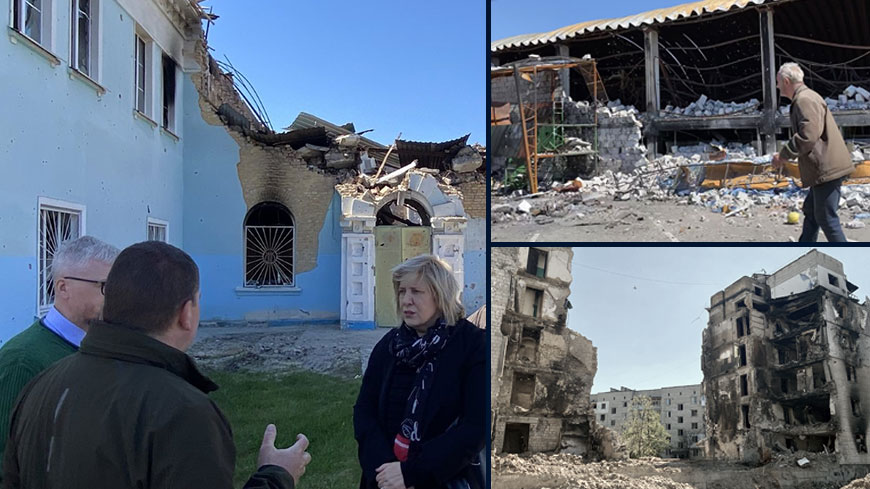 The deliberate targeting by Russian forces of civilians and journalists, increasingly reported instances of sexual violence by Russian soldiers, as well as reports of many missing persons, widespread arbitrary detention, enforced disappearances, and torture and ill-treatment of Ukrainian local government officials, journalists, human rights defenders, and activists in areas newly occupied by Russia, further exemplify the dramatic deprivation of human rights and dire human suffering. “It is now even more important to remember that human rights do not end during war. They do not take a back seat. Even in war, human life and human rights must be protected. And crucially, international humanitarian law must be respected by all and in all circumstances. Civilians and civilian infrastructure must not be targeted. Captured soldiers and those who surrender, the wounded and the sick, must all be treated fairly and humanely,” stressed the Commissioner.

Accountability for violations of human rights and international humanitarian law is key and requires proper documentation and the careful preservation of evidence to build cases to bring those responsible to justice. “Delivering justice will face many hurdles and require sustained efforts. The Ukrainian authorities have already taken important steps to this end, including issuing the first indictments and passing a law establishing the legal framework for cooperation with the International Criminal Court. I particularly welcome the authorities’ commitment to ensuring accountability in full compliance with applicable human rights standards and with due respect for the dignity of victims and their families,” added the Commissioner. “I am committed to assisting them on this path, including by helping with access to existing expertise and best practices in the area of psychological assistance for victims of conflict-related sexual violence.”

With numerous national and international processes aimed at ensuring accountability for grave violations of human rights and humanitarian law running in parallel, proper coordination and care is essential, especially when it comes to securing and preserving evidence, carrying out forensic

analyses, and avoiding the repeated traumatisation of victims. “I call on states to continue to support in every possible way the investigation and prosecution efforts and to coordinate these closely with the Ukrainian authorities, civil society, and the International Criminal Court,” said Commissioner Mijatović.

The war and the ensuing destruction and insecurity has resulted in the internal and external displacement of millions of people, exposing many of them, in particular women and children, to the risk of human trafficking, exploitation or sexual abuse. It has also led to disruption in the provision of basic services and livelihoods, with hundreds of thousands deprived of adequate access to food, water, electricity, healthcare and schooling, disproportionately affecting the human rights of persons at heightened risk such as women, children, older people, persons with disabilities and those living in care institutions. Many of the victims, especially those who suffered deep trauma, urgently require – and will continue to require in the months and years to come – adequate medical and psychosocial assistance. It is crucial to alleviate human suffering by continuing and scaling up the humanitarian response and making sure that it reaches all those who need it.

The Commissioner is moved by the courage and perseverance of ordinary Ukrainians, who have already suffered greatly in the war, in the face of the continuously unpredictable security situation. “In an inspiring show of resilience, scarred towns like Bucha have begun to slowly piece back together their communal life, shattered by the hostilities. But they will need significant and long-term support to repair and rebuild their damaged infrastructure and heal the deep wounds”, said the Commissioner. “I call on the international community to generously and sustainably support them in this daunting task”.

The Commissioner also pays tribute to the courage and commitment of the human rights defenders who have continued their dedicated work inside and outside Ukraine throughout the course of the war. The Commissioner has maintained regular contact with them since the beginning of the war and the visit provided an opportunity to meet with them and to learn first-hand about their work and the problems that they face. She remains committed to working with human rights defenders and civil society and supporting their indispensable work.

“In a matter of a few weeks, the war has dramatically changed life in Ukraine, leaving deep wounds and tremendous damage. I listened to the terrifying stories of families that lost their loved ones. Thousands of innocent lives were ruthlessly cut short and for millions of people, the whole world was turned upside down. In the face of their suffering, we must not be bystanders,” concluded the Commissioner.

During her visit, the Commissioner met with First Deputy Minister for Foreign Affairs, Emine Dzhaparova, Minister of Justice, Denys Maliuska, Deputy Head of the Office of the President of Ukraine, Ihor Zhovkva, Prosecutor-General of Ukraine, Iryna Venediktova, Parliament’s Commissioner for Human Rights (Ombudsperson), Lyudmyla Denisova, and Government’s Commissioner for Gender Equality Policy, Kateryna Levchenko. She also met with Mayor of Kyiv, Vitali Klitschko, as well as mayors and municipality council officials of Irpin, Bucha and Borodyanka. The Commissioner further met with victims of human rights violations, human rights defenders and representatives of civil society, international organisations and non-governmental organisations, as well as the Head of the Crimean Tatar Mejlis, Refat Chubarov.

The Commissioner’s visit to Ukraine is the latest element of her continuous engagement in the response to the human rights consequences of the war in Ukraine since the beginning of the conflict.

The Commissioner’s memorandum on her visit to Ukraine is forthcoming.