Turkey: authorities should refrain from further restricting NGOs activities and freedom of association in the name of counter-terrorism 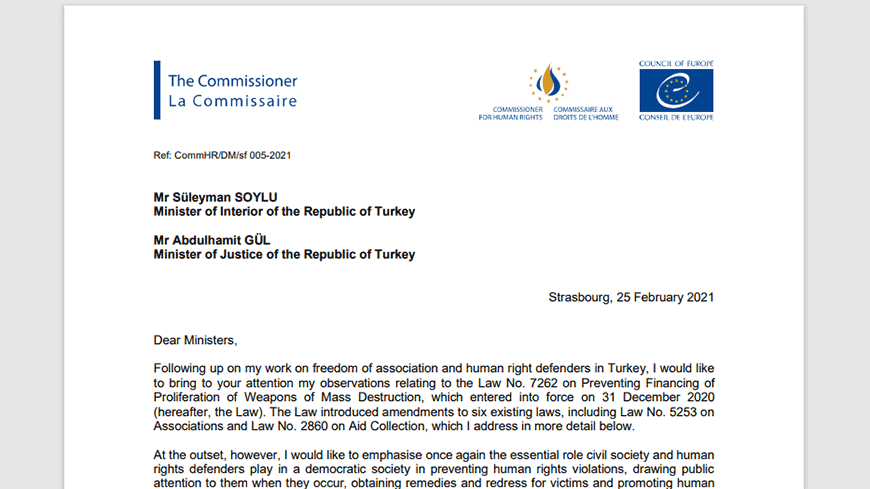 In a letter addressed to the Minister of Interior and the Minister of Justice of Turkey, made public today, the Commissioner calls on the authorities to refrain from further implementing the Law on Preventing Financing of Proliferation of Weapons of Mass Destruction, pending the outcome of the Venice Commission review to be expected in June 2021, stressing that some of the aspects of the Law threaten the very existence of human rights NGOs.

The fact that this law, which entered into force on 31 December 2020, “has been rushed through parliament without any involvement of human rights NGOs epitomises the long standing problem of lack of consultation of these organisations on a systematic and institutional basis”, she said.

The Commissioner further warns that amendments to the laws on Associations and on Aid Collection, introduced by this law, could further stifle dissenting voices and tighten the government’s control on civil society fundraising activities. “Instead of neutralising the negative effects of the emergency decrees regarding NGOs, as I recommended in my report on Turkey, the government appears engaged in exactly the opposite direction by broadening the catalogue of tools which it may use to further target civil society organisations and human rights defenders, and their legitimate and lawful activities”, she regrets.

In this context, she recalls that any measures states take to counter terrorism must comply with all their obligations under international law, in particular international human rights law.