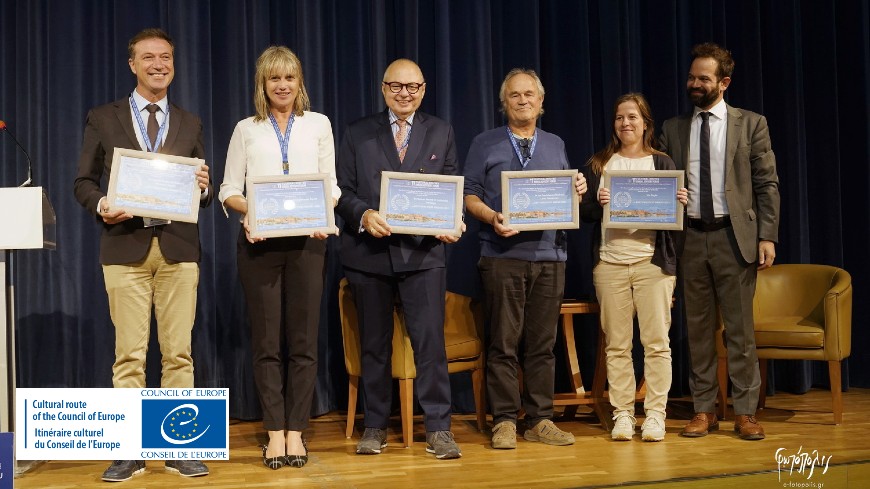 Academics and researchers from all over the world meet every two years to deepen their knowledge of the life and work of R.L. Stevenson. The Cultural Route joined them in Bordeaux on 16 - 17 June 2022 to present the approach of a literary Cultural Route of the Council of Europe dedicated to the author. They also set up a 15-panel exhibition in English: "Journey with Stevenson". The convention led to the promise of signing a scientific partnership agreement.

Since 2011, the European Cemeteries Route proposes to use the cemetery as a classroom and library for a variety of subjects (history, biology, arts, music, ecology, mathematics including more technical activities such as restoration practices). Schools require various cultural programmes to help children learn about the society and culture. And cemeteries can offer an unexpected yet powerful experience. This year the project “Schools in Cemeteries” connected with the project “Week of Discovering European Cemeteries” being promoted through a larger organisation, the “Association of Significant Cemeteries of Europe”.

The dance event "WORK it OUT" premiered in 2018 as ERIH's main contribution to celebrate the European Year of Cultural Heritage. It is aimed primarily at young people (children, teenagers and young adults from school classes, sports clubs, dance and fitness studios, etc.). Through the event, people can experience industrial heritage and its sites and discover its importance in their own past, its relevance for their present and its future potential. On the day of the event the dance took place in front of, in and even on impressive industrial heritage sites throughout Europe. The 5th edition was successfully completed on 25 locations, in 10 countries and with approx. 2.000 dancers.

In July 2022, “Thermal Travels - Immerse Yourself in the Spa Culture of Europe” took place as a co-funded B2C awareness-raising campaign with the European Travel Commission (VisitEurope), with the Great Spa Towns of Europe as a partner to the European Route of Historic Thermal Towns. Elements of the campaign included among others: A new landing page -www.thermaltravels.com; partnership with a tour-operator; 2 social media campaigns with an agency based in the UK an one in North America and Canada; new video clips in English, French and German; press trips for 3 US-journalists who visited France, Germany, Italy, Czech Republic and Greece, which resulted in articles in major US publications, including VOGUE.com and new campaign key visuals.

TExTOUR is an EU-funded project from 2020-2024 which co-designs pioneering and sustainable cultural tourism strategies and policies. The ultimate goal is to improve deprived areas in Europe and beyond. To do this, it sets up Cultural Tourism Labs at eight pilot locations within the EU and beyond. VIA REGIA has one pilot location through its members in the Ukraine. During the war, they developed a new strategy for cultural tourism for the Rivne region in Western Ukraine. Stakeholders on location define through means of collaborative workshops new ways to develop their country.

A photo gallery of the 11th Cultural Routes Annual Advisory Forum 2022 and the Best practices award ceremony is available here.