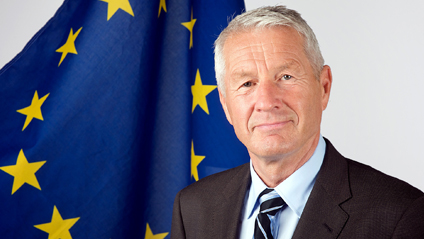 Mr Thorbjørn Jagland was elected Secretary General of the Council of Europe in September 2009.  In June 2014, he was re-elected, and his second term in office commenced on 1 October, 2014.

He was the President of the Storting (Norwegian Parliament) from 2005 to 2009.

He is a member of the Norwegian Nobel Committee, which awards the Nobel Peace Prize every year.

He has held two of the most influential governmental positions in Norway: Prime Minister (1996-97) and Minister of Foreign Affairs (2000-2001).

After serving as Foreign Minister, he was Chairman of the Standing Committee on Foreign Affairs and the enlarged Foreign Affairs Committee in the Storting for four years (2001-2005). He also served as Chairman of the EEA Consultative Committee during this period (2000-2005). In addition, he has held a number of other parliamentary positions, such as head of the Storting's Delegation for Relations with the European Parliament for six years.

He was a member of the Storting for 15 years.

He is currently the Chairman of the Board of Directors at the Oslo centre for Peace and Human Rights, and Member of the International Board of Governors at the Peres Center for Peace. 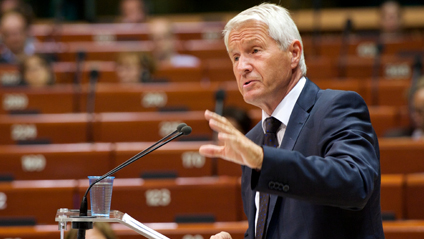 Over the last 20 years, Mr Jagland has published widely on a range of issues, in particular on European and international affairs. He has published four books in Norway: My European Dream (1990), Letters (1995), Our Vulnerable World (2001) and Ten Theses on the EU and Norway (2003).

He holds a degree in Economics from the University of Oslo (1975).

He was born on 5 November 1950 in Drammen, Norway. He is married to Hanne Grotjord. They have two children.