“Cultural Routes for Dialogue between Generations. A youth workshop” – a dialogue for a future in the spirit of interculturalism

Presidency of the Committee of Ministers Castelvetrano 17 December 2021 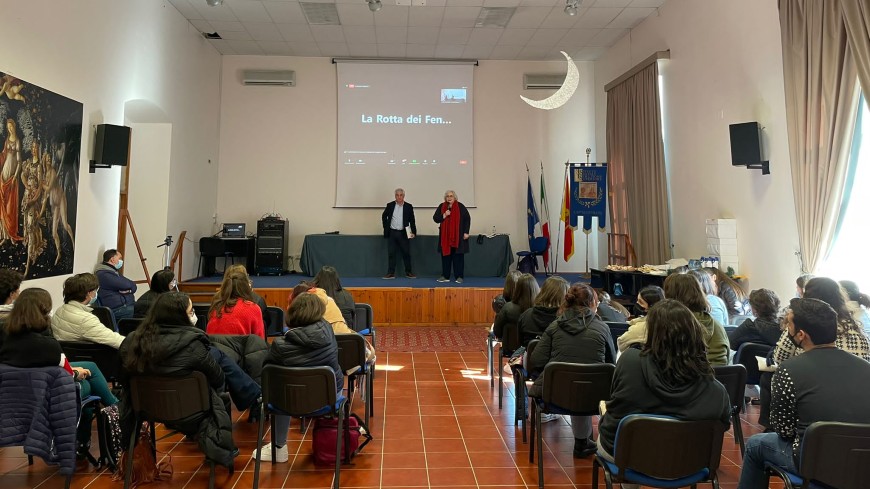 The event Cultural Routes for Dialogue between Generations. A youth workshop took place today, Friday 17th December, at the Liceo Classico statale "G. Pantaleo" in Castelvetrano (TP), with the support of the Minister of Foreign Affairs and International Cooperation and within the scope of the Semester of the Italian Presidency of the Committee of Ministers of the Council of Europe. Castelvetrano is also host to the headquarters of the Phoenicians' Route since its establishment in 2003.

MAECI’s choice to support the event is in line with the strong focus, within the Italian Presidency, towards young people, the protection of their rights as well as their preparation to become conscious and responsible citizens through education inspired by the pursuit of peace, the protection of human rights and of the rule of law. Therefore, during our Semester of Presidency, we have planned various initiatives aimed at promoting better knowledge, including amongst young people, of the Council of Europe and of the values ​​and principles, which it protects and promotes.

The Cultural Routes of the Council of Europe are an invitation to travel and discover the rich and varied European cultural heritage with the aim of creating a network of people and places linked by a common history and heritage. The 45 certified Cultural Routes cover various historical periods and a wide range of themes including architecture and landscape, religion and spirituality, gastronomy and intangible heritage, the great masters of art, European music and literature. Each Route helps to enhance and promote the cultural heritage of the various European regions, taking into account the differences that represent the great wealth of our continent. Italy is one of the European countries with the largest number of certified Cultural Routes (as many as 27), some of which have their institutional headquarters in our peninsula.

In this context, the event organised by the Association Phoenicians' Route, Cultural Route of the Council of Europe had as its main objective the proposal to reflect on issues of great relevance and depth such as environmental sustainability and the enhancement of cultural, natural and landscape heritage by taking into account new professions and technological innovation.

Students of the Liceo together with other students from different States of the Council of Europe, who connected remotely, were the protagonists of the event. Thanks to the participation of representatives of several Cultural Routes and experts in the field, they were able to reflect on the role of the Routes as learning opportunities for the young people and to analyse post-Covid conditions and future prospects of the new generations in-depth. Opening the event, Tania Barresi, Principal of the Liceo, Antonio Barone, Director of the Phoenicians' Route - Cultural Route of the Council of Europe and Roberta Alberotanza, Advisor to the Directorate General for Political and Security Affairs, of the Task Force for the Italian Presidency of the Committee of Ministers of the Council of Europe.

Today's appointment constitutes the official presentation of activities for the 2022 European Year of Young People by the Phoenicians' Route, which since 2014 has established an International Network of Mediterranean Schools (EduNet). It aims to create a cultural space for exchanges and proposals, based on good educational practices and education on heritage, the themes of identity and the enhancement of cultural patrimony, in order to strengthen the commitment of young people to promoting intercultural dialogue.

In 2022, the initiative will continue to develop thanks to the collaboration with several schools in Italy and some important varied associates of the Phoenicians' Route - including the Observatory on Tourism in the European Islands OTIE, the Association of Archaeological Groups of Italy GAL and the National Union Pro Loco of Italy UNPLI – who will be involved in the implementation of activities which, based on the Faro Convention, will be carried out in all the territories of the Phoenicians' Route, in the European and non-European countries involved, from Lebanon to Portugal, in a Euro-Mediterranean perspective.