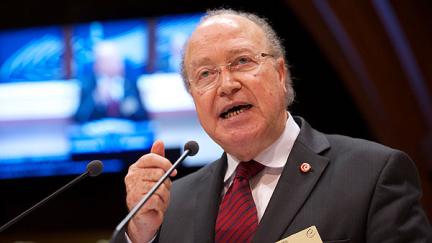 Strasbourg, 28 June 2012 - In his passionate, nearly 40-minute speech, he told the Council of Europe's Parliamentary Assembly that the Tunisian transformation to democracy is on the right path because "when some extremists become aware that we are sticking to a timeline [drafting a constitution, holding elections], it is then that they react.

"The media in Tunisia focus on isolated events, which the Western media follow, and then we have the impression that Tunisia is Kandahar, which is not reality," he said. He praised the PACE report Political transition in Tunisia (Doc. 12949) by Ms Anne Brasseur (Luxembourg, ALDE) because it was based on analysis made in the country.

To critics who claim that violent acts of the Salafists have been dealt with too much leniency, Mr. Ben Jaafar replied that many members of Tunisia's Constituent Assembly had been victims of oppression under the old regime, which dealt harshly with extremism. The current provisional government, he explained, seeks "dialogue and consensus among all factions – and history shows that this is the best path."He then said that women in Tunisian society will enjoy freedom and equality, that the country is committed to preserving women's rights.

Nevertheless, he struck a cautionary note: "We are in a post revolutionary phase", and he underscored economic stress that the country is facing, including falling tourism and unemployment. He also said that illegal immigration, which "keeps us and you awake at night" must be dealt with in a positive manner, between countries north and south of the Mediterranean. In the end, he proclaimed, "the Tunisian Revolution has shown that there is no contradiction between Islam and democracy."