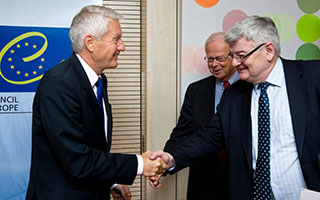 Born in 1963 in the suburbs of Paris, Martin Hirsch is the former High Commissioner for Active Solidarities against Poverty and for Young People in the French government. He holds a Master in Neurobiology and attended the Ecole Normale Supérieure as well as the National School of Administration and then became an Auditor in the Council of State.

He entered politics in 1997 as Head of Office of Bernard Kouchner (Secretary of State for Health and Social Action) and advisor to the Private Office of Martine Aubry. After having spent seven years as the President of the Central Union of Emmaüs Communities (1995-2002), he became the President of Emmaüs France in 2002.

He retired in 2007 following his nomination to the French government. Desiring to put an end to the left-right divide in French politics, he has implementend the "Income of Active Solidarity", one of President Sarkozy's campaign promises. Between 2009 and 2010 he has combined this function with the post of Youth Commissioner. After the regional elections, Mr. Hirsch left the French government and is now the President of the Civic Service Agency since May 2010.