124th Session of the Committee of Ministers 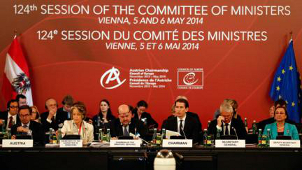 Items on the agenda included:

· Council of Europe values and stability in Europe: current challenges

a) State of democracy, human rights and the rule of law in Europe – Report by the Secretary General
b) The current crisis in Europe

· Co-operation with the European Union

· The policy of the Council of Europe towards neighbouring regions