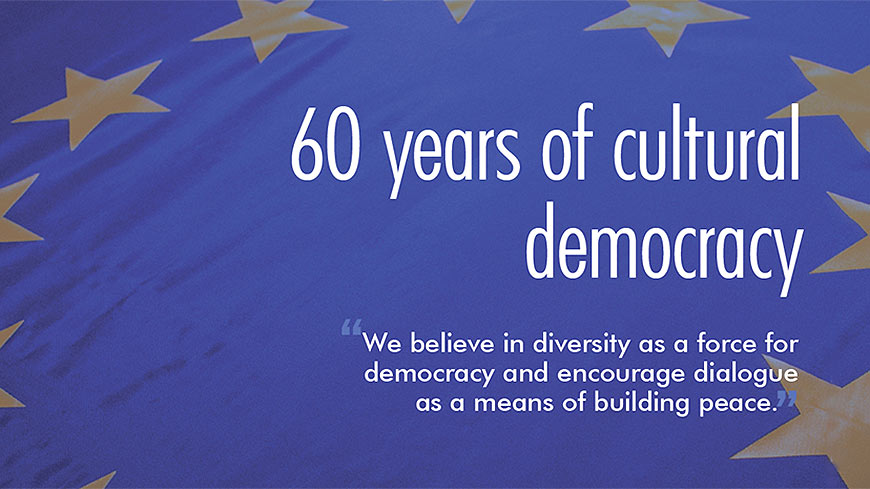 On 19 December 2014, the European Cultural Convention, source of all Council of Europe work on culture and education, will be 60 years old.

To commemorate this founding instrument, the Belgian Chairmanship of the Council of Europe has placed on its agenda a high-level conference which will be the opportunity to look back on the major achievements that mark those 60 years, but above all for looking ahead into the future by reflecting on the medium and longer term challenges to be taken up by the Council and its member states in education, the principal theme chosen for this anniversary.

The conference, to be held in Brussels at the Palais d’Egmont with over 300 persons from 50 countries present, will be conducted in the form of a round table moderated by Professor Jan De Groof (Europe College, Bruges / University of Tilburg). Ms Mirela Kumbaro Furxhi, Minister of Culture of Albania, Ms Gabriella Battaini-Dragoni, Deputy Secretary General of the Council of Europe, Mr Xavier Prats Monné, Director General of Education and Culture in the European Commission, Mr Jindřich Fryč, Vice-Chairman of the Council of Europe Steering Committee for Educational Policy and Practice, and Ms Elisabeth Gehrke, President of the European Students’ Union (ESU), will take part.

The conference theme will be introduced by Mr Jorge Sampaio, former President of the Portuguese Republic (1996-2006) and United Nations High Representative for the Alliance of Civilisations (2007-2013), President of the Global Platform for Syrian Students.

The event will be heightened by the presence of Ms Hilde Crévits, Vice Minister-President of the Flemish Government and Flemish Minister for Education who will open the conference, in the presence of Ms Battaini-Dragoni and a European Commission representative, as well as Ms Joëlle Milquet, Vice-President of the Wallonia-Brussels Federation, Minister for Education, Culture and Childhood who will deliver the closing address.

On the sidelines of this event, on 18 December Belgium will organise an informal meeting of the Council of Europe Steering Committee for Educational Policy and Practice. The participants will attend an evening debate held at the BOZAR Centre for Fine Arts on the links between culture and education.