Environment and human rights: towards a right to a healthy environment?

русский
Presidency of the Committee of Ministers Strasbourg 20 February 2020 In response to the threats to climate and biodiversity, the Georgian Presidency of the Committee of Ministers of the Council of Europe will organise a conference on Thursday 27 February in Strasbourg on the protection of the environment from a human rights perspective.

The conference, which will be attended by ministers and high-level representatives of the Organisation’s 47 member countries, aims to examine the potential of the Council of Europe’s work in the human rights field for tackling the environmental emergency and identifying ways of helping European governments to take up the challenge.

Discussion will be based on the European Convention on Human Rights and other instruments, such as the Bern Convention on the conservation of European wildlife and natural habitats, as well as an academic report which reviews the body of standards produced by the Council of Europe and makes recommendations on “ecological human rights” and “access to environmental justice”, among other issues. 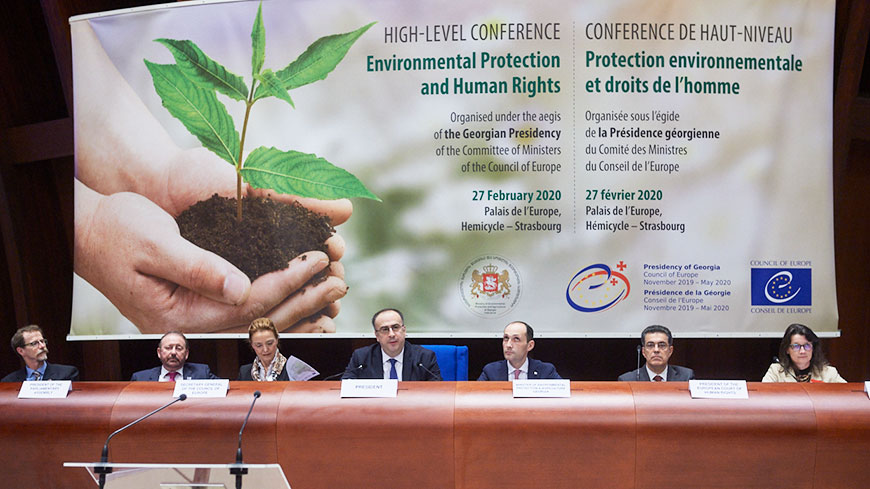 Quotes from the opening

Opening the conference, Minister of Environment protection and Agriculture of Georgia Levan Davitashvili underlined the significant role of the European Court of Human Rights as “one of the fundamental human rights mechanism in the sphere of environmental protection”.

“Despite the absence of a specific reference to the environment in the Convention of Human Rights, the Court has clearly established that environmental degradation, ineffective assessment of environmental risks (…), can result in violations of substantive human rights, such as the right to life, to private and family life, the prohibition of inhuman and degrading treatment, and the peaceful enjoyment of the home”.

The objective, he said, is to “strengthen co-operation in environmental protection, through the Council of Europe, and balance development and nature needs, to provide the healthy environment for current and future generations”.

“The impact of environmental change is real and growing”, said Council of Europe Secretary General Marija Pejčinović Burić. “We can see it in our changing landscapes. We can recognize it in the loss of our biodiversity. And we can observe it in the increased migration and displacement of people.”

The Secretary General recalled that the Council of Europe has already proven its ability to act in this area, referring for example to the Bern Convention on the Conservation of European Wildlife and Natural Habitats and to the European Landscape Convention.

In her speech, she underlined the need for some Conventions to be modernized, and to discuss how to promote co-operation, help governments develop appropriate policies and how to train legal professionals.

PACE President Rik Daems made a plea to upgrade current legal instruments with the ultimate aim of drafting an additional Protocol to the European Convention on Human Rights concerning the right to a healthy environment.

In this perspective, he presented a three-step plan: the drafting of a recommendation by the Committee of Ministers to the member States on human rights and the environment; a possible convention on this issue setting out some standards; as well as, in the medium term, the drafting of an addition Protocol to the Convention on Human Rights.

Mr Daems welcomed the efforts of the Georgian Presidency to address this issue and underlined that the “Trialogue”, involving the Committee of Ministers, the Assembly and the Secretary General, was an effective way to move forward with this roadmap.