History of the Platform: a Council of Europe policy choice

The Platform of resources and references for plurilingual and intercultural education is the tangible result of the targeted political choices made by the Council of Europe in response to the wish of Heads of State and Government to promote social inclusion and cohesion.  The Platform has been built up over time, on the basis of the work carried out by groups of experts and their collaboration with representatives of the member States.

In response to the call made by the Heads of State and Government at their 3rd Summit in Warsaw (May 2005) for greater efforts to promote social inclusion and cohesion in Europe, the Council of Europe's Language Policy Unit (now known as the Programme) launched the "Languages in education, languages for education" project, focused from the outset on means of fostering social cohesion and equal access to quality education.  A preliminary survey of curricula for official languages of schooling was carried out the same year, and 14 thematic studies were commissioned. Two major events had been organised by 2006: an international governmental conference in Strasbourg and an academic intergovernmental symposium in Krakow. Throughout the ensuing odyssey, lasting more than ten years, the Language Policy Unit commissioned studies and gathered the results of experts' research into the decisive role of language in academic achievement, inclusion and social equity.

The member States were asked to report on how this question was approached within their respective education systems. The different concepts and practical experiences of devising curricula, training teachers and improving academic results were examined in a major series of five conferences intergovernmental and four workshops focusing on different aspects of the language dimension (approach based on a reference framework and descriptors, vulnerable learners, plurilingualism, subject-specific literacy).  In parallel, over 120 documents (surveys, thematic studies, background documents, conference contributions and conference reports) were published on the Platform as work was in progress. 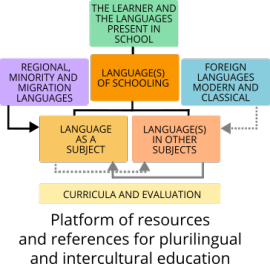