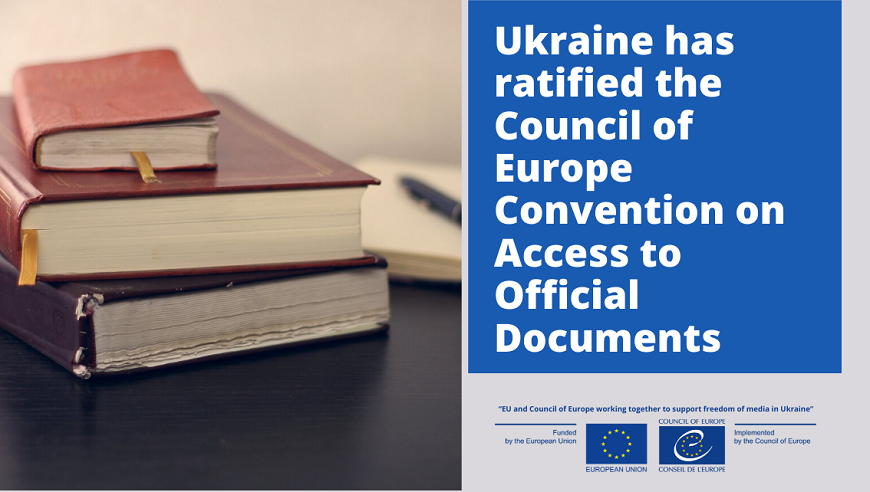 On 20 May, 2020, the Parliament of Ukraine by 305 votes adopted the draft law No 0032 "On Ratification of the Council of Europe Convention on Access to Official Documents".

Ukraine became the tenth country to ratify the  Tromsø Convention (Council of Europe Convention on Access to Official Documents) and effectively launched this important international document, as the Convention enters into force with the tenth ratification.

"Ratification of the Tromsø Convention is an important signal. It shows that Ukraine is a proactive state that is able to develop and share valuable practices, as well as demonstrates Ukraine's desire to ensure transparency of public authorities and promote transparency in other countries," — said Olena Lytvynenko, Deputy Head of the Council of Europe Office in Ukraine.

"Thanks to this, Ukraine today has the opportunity to demonstrate its ability to be fully engaged into development of international standards on access to official documents, to disseminate successful experience in providing public information, to become a real flagship in this field," —Yevheniia Kravchuk, Deputy Chairperson of the Parliamentary Committee on Humanitarian and Information Policy, underlined in her Facebook post.

The Convention was adopted by the Council of Europe in the city of Tromsø (Norway) and has been open for signing since June, 2009. It was also ratified by Sweden, Bosnia and Herzegovina, Estonia, Finland, Norway, Moldova, Croatia, Montenegro and Lithuania.

This Convention is the first binding international legal instrument to recognize a general right of access to official documents held by public authorities.

Transparency of public authorities is a key feature of good governance and an indicator of whether or not a society is genuinely democratic and pluralist. The right of access to official documents is also essential to the self-development of people and to the exercise of fundamental human rights. It also strengthens public authorities’ legitimacy in the eyes of the public, and its confidence in them.

This Convention lays down a right of access to official documents. Limitations on this right are only permitted in order to protect certain interests like national security, defense or privacy.

The Convention sets forth the minimum standards to be applied in the processing of requests for access to official documents (request forms), review procedures of decisions taken. It is important that the ratification of the Tromsø Convention does not require introducing radical changes in Ukrainian legislation, as the Law of Ukraine "On Access to Public Information" has already taken into account most of its requirements, with the exception of access to archival documents.

After Tromsø Convention becomes effective the monitoring bodies in the sphere of access to public information will be established for the first time: Group of Specialists on Access to Official Documents and the Consultation of the Parties whose actions will be aimed at monitoring of the implementation provisions of Tromsø Convention by signatory states.

The Group of Specialists on Access to Official Documents shall consist of a minimum of 10 and a maximum of 15 members that shall be chosen from among persons of the highest integrity recognised for their competence in the field of access to official documents (Article 11). Representative of Ukraine will be a part of this group.

The Group of Specialists  will perform the reporting on the adequacy of the measures in law and practice taken by the Parties to give effect to the provisions set out in this Convention and will have such competences:

Second body of the monitoring system of Convention is Consultation of the Parties that shall be composed of one representative per Party, including Ukraine.

The Consultation of the Parties shall take place with a view to:

The Consultation of the Parties shall be convened by the Secretary General of the Council of Europe within one year after the entry into force of this Convention in order to elect the members of the Group of Specialists.

Convention shall enter into force on the first day of the month following the expiration of a period of three months after the date on which 10 member States of the Council of Europe have expressed their consent to be bound by the Convention.