"Orange the World: END VIOLENCE AGAINST WOMEN NOW!": Joint statement in observance of the International Day for the Elimination of Violence Against Women on November 25 and the accompanying 16 Days of Activism Against Gender-Based Violence, 2021 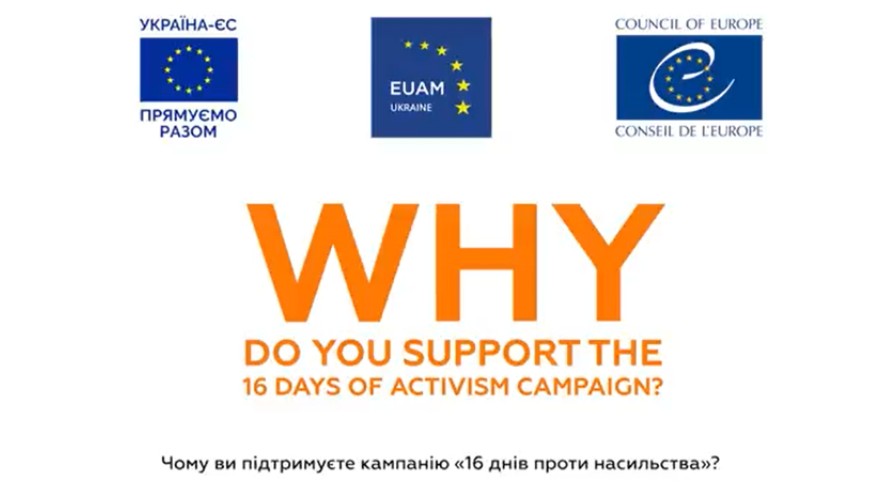 Joint statement in observance of the International Day for the Elimination of Violence Against Women on November 25 and the accompanying 16 Days of Activism Against Gender-Based Violence, 2021

In observance of the International Day for the Elimination of Violence Against Women on November 25, and the accompanying 16 Days of Activism Against Gender-Based Violence, the EU Delegation to Ukraine, the EU Advisory Mission for Civilian Security Sector Reform (EUAM Ukraine) in Ukraine, and the Council of Europe Office in Ukraine, together with the Embassies of Belgium, Canada, Croatia, Cyprus, Czech Republic, Denmark, Estonia, Finland, France, Germany, Hungary, Italy, Luxembourg, Netherlands, Norway, Portugal, Romania, Slovenia, Spain, Sweden, Switzerland and the United Kingdom, the UN Resident Coordinator Office in Ukraine and the European Investment Bank’s Representation to Ukraine reaffirm our commitment to defending the rights of women and girls in Ukraine to live free from violence.

The international 16 Days Campaign is 30 years old this year, and although we wish this Campaign were no longer necessary, the reality is different.

Studies show that 67% of women in Ukraine have experienced psychological, physical or sexual violence by their partner or another person since the age of 15. Most often, the perpetrators are intimate partners. These numbers do not reflect the impact of the COVID-19 pandemic, which has exacerbated all of the contributing factors relating to violence against women and girls, including unemployment and poverty, and reinforced many root causes, such as gender stereotypes and harmful social norms.

We note that in June 2019, the International Labour Organisation (ILO) Convention No. 190, the first international treaty to recognise the right of everyone to a world of work free from violence and harassment, including gender-based violence, was adopted.  We encourage Ukraine to ratify this Convention.

It has been noted that in Ukraine, blaming the victim and the difficulty in proving harassment in court are the biggest barriers to combating sexual harassment in the workplace.

We wish to acknowledge that (sexual) harassment, gender stereotypes and sexism at work, just like gender-based violence against women, are crucial factors holding back women, not just in their careers but in all aspects of life. Therefore, we encourage Ukrainian state actors to strengthen the systems of prevention and response.

We are committed to ending violence against women and urge Ukraine to stand united with us in this effort. Now is the time to put an end to gender-based violence and move towards accountability.