Background of the project

The launching conference of the Project "Shared Histories for a Europe without dividing Lines" took place in Oslo on 16 and 17 June 2010.

The conference was organised by the Council of Europe in co-operation with the European Wergeland Centre and the support of the Norwegian Ministry of Education.

Report of the conference

Interactions and convergences, as much as tensions and conflicts, have left their imprint on the history of Europe’s living space. Despite the great diversity of cultures and identities, its inhabitants after the second world conflict embarked on the process of European co-operation and construction. This was because throughout the course of history the European realm has undergone developments and transformations common to every region and people, the upshot of which has been a freely expressed resolve to build a united future. Our history has made Europe a continent distinctive in the unique combination of our common features and the peculiarities that are the hallmark of each of our countries, continental subsets and also social groups.

The previous project implemented by the Steering Committee for Education on "The image of the Other in History Teaching" highlighted the implications for politics, the objectives and methodology for teaching history of cultural diversity of European societies, globalisation and the need for accompanying, if necessary, the confidence-building process in post-conflict situations. 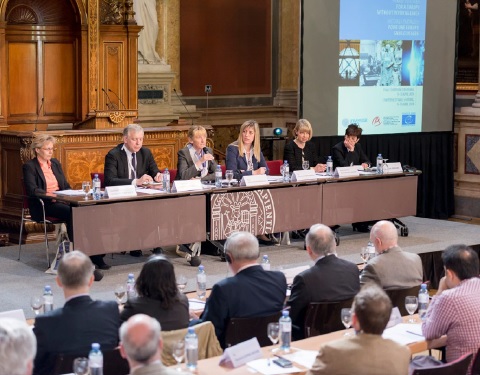 The Council of Europe Final Conference on Shared histories for a Europe without dividing lines was organised on 9th-10th April 2010 in co-operation with Vienna University in the framework of the Austrian Chairmanship of the Committee of Ministers of the Council of Europe.

The Conference presented the main results and outcomes of the four year intergovernmental project and took the opportunity to commemorate the 60th Anniversary of the European Cultural Convention and the 100th anniversary of the outbreak of the First World War.