ELoGE in Spain: Fourth Round of Awards for the Basque Municipalities 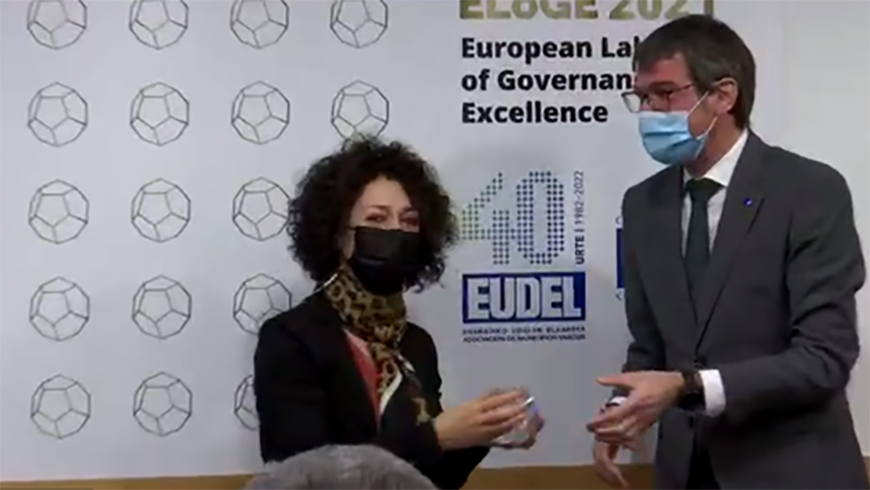 Participation, Representation and Responsiveness are among the 12 Principles of Good Democratic Governance, they are crucial for establishing trust between the citizens and their local authorities. They are also the Principles against which the Basque municipalities scored higher in the fourth round of implementation of the European Label of Governance Excellence (ELoGE), which was concluded on 19 January 2022 with the official Award Ceremony.

During the event, the municipalities of Andoain, Basauri, Bilbao, Eibar, Urnieta, and Vitoria-Gasteiz were awarded the crystal dodecahedrons, which symbolise the Label and compliance with the 12 Principles.

Gorga Urtaran, the President of EUDEL, and Alina Tatarenko, Head of the Council of Europe’s Democratic Governance Division, congratulated EUDEL and the participating municipalities on this occasion. According to Asier Iragorri Basaguren, Mayor of Basauri, his local council became better, and it now provides better services to citizens, as a result of the ELoGE assessments.

ELoGE is awarded to municipalities which have demonstrated compliance with the 12 Principles of Good Democratic Governance, measured against a Council of Europe benchmark. Currently, ELoGE has been or is being implemented in about 20 of the Council of Europe member states. The Centre of Expertise for Good Governance has been supporting its implementation in the Basque Country since 2017.