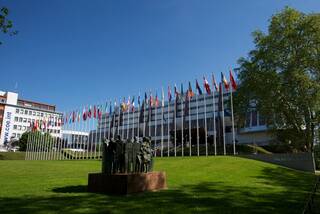 On 5-6 November 2007, a Regional European Meeting on the World Programme for Human Rights Education was organized in Strasbourg by the Council of Europe in co-operation with the Office of the UN High Commissioner for Human Rights (OHCHR), UNESCO and the OSCE - Office for Democratic Institutions and Human Rights.

The aim of the conference was to assist the states parties to the European Cultural Convention in the implementation of the Plan of Action for the first phase of the WPHRE.

The participants of the meeting were the officials from the 49 states parties to the European Cultural Convention, involved in the national implementation of the Plan of Action at the decision making and executive level.

Representatives of international institutions, civil society and foundations active in the field were also invited. Up to 200 hundreds participants took part to the meeting.

The Regional Meeting was planned as a forum for discussion, for problem solving and for planning of future activities.

The meeting was also expected to help take stock of the European expertise in HRE, which could be used and promoted in other parts of the world.