Forum on “Civic Partnerships for Citizenship and Human Rights Education” 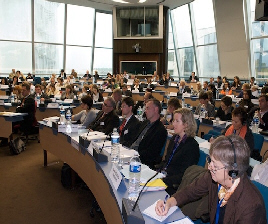 On 9-10 October 2008, a Forum on “Civic Partnerships for Citizenship and Human Rights Education” was organised by the Council of Europe in Strasbourg.

The Forum looked at the importance of developing partnerships between governments, regional and local authorities, civil society organisations and other relevant actors for effective promotion of EDC/HRE.

There is already a wealth of good practices developed in this respect in the Council of Europe member states, but such partnerships need to be further developed and supported.

The aim of the Forum was to produce recommendations on how this could be done at national and European level.