Bulgaria: Anti-torture committee says conditions in social care institutions could be described as inhuman and degrading; the situation in penitentiary establishments generally improved

français
The Council of Europe’s Committee for the Prevention of Torture and Inhuman or Degrading Treatment or Punishment (CPT) has published today the report on its seventh periodic visit to Bulgaria, which took place from 25 September to 6 October 2017. The document has been made public at the request of the Bulgarian authorities.
04/05/2018 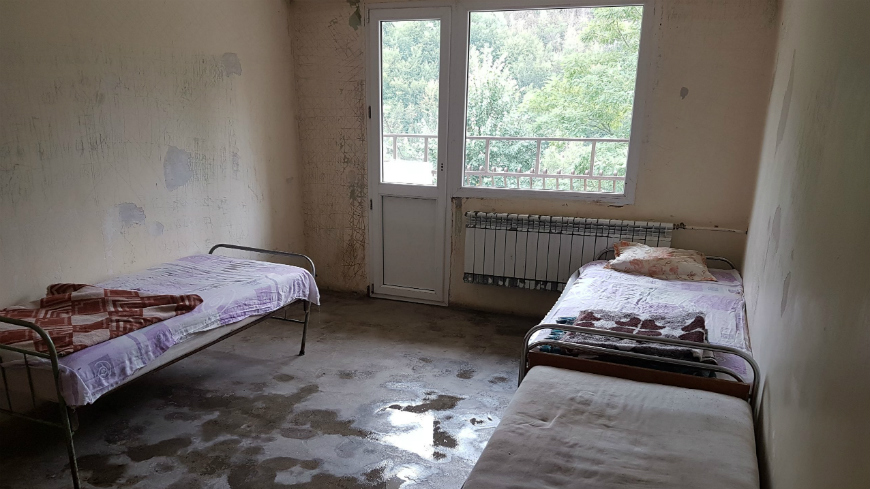 Regarding the treatment of persons in police custody, the Committee concludes that, in some respects, the findings of the 2017 visit suggest that there might have been a slight improvement since the previous visit to Bulgaria in 2015, especially as regards the severity of alleged ill-treatment. That said, the delegation still received many allegations of physical ill-treatment from persons (including juveniles) who were or had recently been detained by the police.

The delegation received a few allegations of physical ill-treatment by custodial staff at the Special Home for Accommodation of Foreigners in Lyubimets; further, many complaints were received about custodial staff being disrespectful to detained foreign nationals.

Material conditions in Lyubimets were generally very poor, with large-capacity dormitories being dilapidated, filthy, and crammed with bunk beds. Absolutely nothing was provided for more than 40 minors accompanying their parents (including infants) - no adapted food and clothes, no toys, and it was difficult to obtain nappies for infants and sanitary materials for women.

However, the situation was totally unacceptable in the IDF in Sliven and in the building accommodating foreign prisoners at Sofia Prison. After the visit, the Bulgarian authorities informed the CPT that refurbishment of the aforementioned building had started and was to be completed in August 2018. As regards Sliven IDF, the Bulgarian authorities said that a tender procedure for the construction of a new IDF had been initiated.

More generally, the Committee noted that there was a severe problem of a generalised infestation with bed bugs, including in recently refurbished facilities. The Bulgarian authorities informed the CPT that all mattresses, bed sheets, pillows and blankets in penitentiary establishments would be replaced by the end of August 2018.

The Committee further notes that corruption remains a serious issue in Bulgarian prisons. As observed on previous CPT visits, prison staff appeared to be the major source of contraband coming into prisons; further, the delegation again heard allegations that some staff demanded payments for issues such as a positive assessment of the inmate’s behaviour and providing a work place.

The CPT’s delegation received only very few complaints and allegations concerning ill-treatment by prison staff, and the allegations heard mostly referred to verbal abuse and rude behaviour. Inter-prisoner violence remained, by contrast, a serious problem in most of the establishments visited, especially at the IDF located on G.M. Dimitrov Boulevard in Sofia and at Sofia and Varna Prisons.

Turning to psychiatric establishments, the CPT’s delegation received various allegations at Radnevo Psychiatric Hospital according to which patients were sometimes slapped and occasionally hit, kicked and punched by orderlies. Furthermore, orderlies there were said to carry sticks (later found by the delegation) to assert their authority and threaten the patients.

The premises in psychiatric hospitals visited, i.e. Radnevo and Sevlievo, were in parts dilapidated, bare and lacking personalisation, especially on the locked wards. Many of the patients on the locked wards were severely limited in accessing fresh air, sometimes not being able to go outside for weeks on end.

The Committee recommends taking urgent measures to address the serious recruitment difficulties regarding medical, auxiliary and multi-disciplinary clinical staff. As found by the CPT’s delegation, the inability to recruit orderlies at Radnevo Psychiatric Hospital led to the unacceptable practice of employing a number of in-patients from the male addictions ward to act as orderlies in the hospital, including helping the staff to control and restrain other patients.

In the context of the findings at Tvarditsa Home, the Committee was very concerned to learn about the death of a 30 year-old male resident in September 2017. In the absence of an autopsy, the CPT requested the Bulgarian authorities to effectively investigate the circumstances surrounding, and the causes of, this death. According to the Bulgarian authorities, on 13 December 2017 Sliven District Prosecutor’s Office had initiated a pre-trial investigation into a crime under article 124 (1) of the Criminal Code.

Living conditions varied between and within the social care establishments visited. It was noted that all Homes had undergone differing degrees of renovation and refurbishment, and some accommodation, especially in Tvarditsa, was acceptable. However, most of the accommodation was still scruffy, bare, austere and lacking personalisation and privacy, especially for the less able residents.

The unit at Radovets Home accommodating the most disabled residents contained only two large dormitories and no sanitary facilities. In one of the two dormitories (known to the residents as the “pissy room”) hygiene conditions did not befit a care institution and could be described as inhuman and degrading. Residents were found lying on their beds, completely covered in flies, with the floor flooded with urine and littered with faeces. After the visit, the Bulgarian authorities informed the CPT that two new sanitary facilities had been constructed in the establishment, new bedding was ordered, and measures were being taken to ensure compliance with sanitary standards.

Despite recourse to seclusion in social care homes being forbidden by Bulgarian law, the CPT’s delegation found that three seriously mentally disabled residents of Kachulka Home, who were deemed especially dangerous, were placed by staff alone in reinforced locked rooms for days on end. In Radovets Home, staff acknowledged that one resident, deemed to be especially unpredictable, was sometimes placed in a makeshift seclusion room under a set of outdoor stairs for hours on end.

Finally, the number of nurses and orderlies available to provide care, comfort and supervision to residents in all the social care establishments visited was inadequate and sometimes woefully low. The CPT cannot escape the sober conclusion that residents in the social care establishments visited had de facto been abandoned by the State, which had manifestly totally failed to provide those vulnerable persons with the human contact, comfort, care and assistance they required, as well as the dignity they deserved. It is equally regrettable that staff (and the management) of these establishments had been left to struggle from day to day with totally insufficient human resources, without adequate funding and without any attention or support from the Bulgarian authorities.