The Committee of Experts on Terrorism (CODEXTER) was set up in 2003 by the Committee of Ministers of the Council of Europe and mandated to work on the elaboration of legal instruments covering existing lacunae in international law.

In this capacity, CODEXTER drafted the Council of Europe Convention on the Prevention of Terrorism which was opened for signature on 16 May 2005 in Warsaw.

It was the first international treaty criminalising the following three offences: 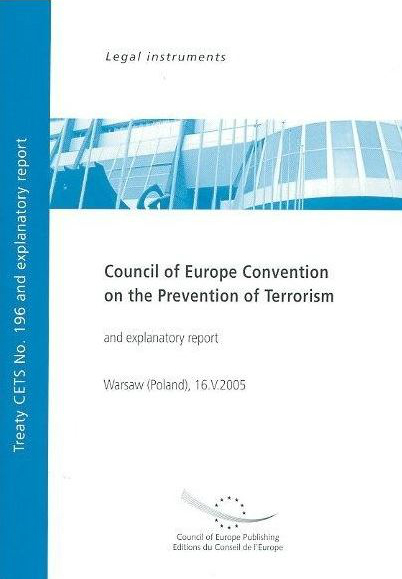 The Convention aims to increase the effectiveness of existing international texts on the fight against terrorism and to strengthen Member States’ efforts to prevent terrorism and its negative effects on the full enjoyment of human rights and in particular the right to life.

It also aims to reinforce cooperation on the prevention of terrorism both internally, in the context of the definition of national prevention policies, and internationally through a number of measures, including modification of existing extradition and mutual assistance arrangements, by making the offences set forth in the Convention extraditable and imposing an obligation to provide mutual legal assistance with respect to them.

The Convention provides equally for additional means, such as spontaneous information, the duty to investigate, the liability of legal entities, and the obligation to prosecute where extradition is refused. By ratifying the Convention, the States undertake to adopt measures necessary to protect and support victims of terrorism.

The Convention entered into force on 1 June 2007 and has been ratified by 37 countries.

It is open for signature by the member States of the Council of Europe, the non-member States which have participated in its elaboration and the European Union. The Committee of Ministers may invite other States to become Parties to the Convention.