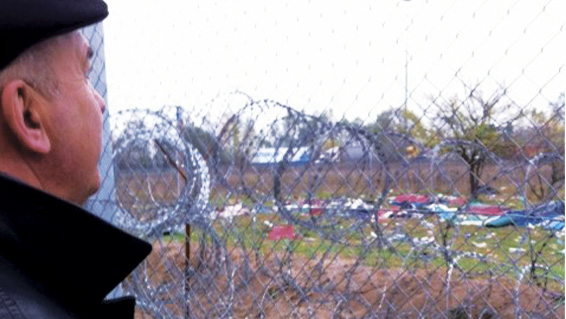 The Commissioner at the Röszke transit zone, on the border with Serbia

An effective response to the current refugee movements across Europe can only be found through concerted European action, but states must continue to abide by their human rights obligations. “I am concerned that Hungary has not lived up to this challenge” said Nils Muižnieks, Council of Europe Commissioner for Human Rights, at the end of a three-day visit to Hungary today. With close to 400,000 people arriving at its borders in search of international protection in 2015, Hungary has been confronted with an unprecedented task in this field. However, a series of swift measures taken in recent months have rendered access to international protection extremely difficult and unjustifiably criminalised immigrants and asylum seekers.

The Parliament introduced in July 2015 an accelerated asylum procedure lacking essential safeguards and used in practice for the great majority of applicants. Subsequently, the authorities constructed a razor-wire fence first at the Serbian and then at the Croatian borders, and created makeshift transit zones, where an extremely accelerated asylum procedure (referred to as border procedure) applies. Under this procedure asylum applications are hardly ever examined on the merits. “Some asylum-seekers have seen their claim processed in less than a day and sent back to Serbia directly from Röszke transit zone” said the Commissioner who visited this transit zone during the mission.

The Commissioner noted the proclamation in September 2015 by the government of a mass migration crisis in response to the sharp increase of arrivals of asylum seekers in the country, during which the border procedure applies. “Crisis measures are no longer necessary now that the number of migrants accessing Hungary is again very low. The new border procedure and the transit zones should be replaced by a fully human-rights compliant asylum procedure”, said the Commissioner.

Worryingly, Hungary introduced criminalisation of migrants and asylum seekers by establishing offences related to illegal crossing of the border fence as well as a specific fast-track criminal procedure applicable to these offences that is problematic in terms of fair trial standards. There is also a risk that criminal law provisions related to facilitation of border crossing may be applied to volunteers who provide humanitarian assistance to migrants, a factor that could have a chilling effect on action for solidarity. “Migrants and asylum seekers are not criminals and should never be treated as such” said the Commissioner who urged the authorities to remove the newly created criminal offences related to migration.

Another issue of serious concern to the Commissioner is the risk of refoulement to Serbia of asylum seekers and persons transferred to Hungary from other EU member states under the Dublin regulation (“Dublin returnees”) on the grounds of inadmissibility of their claims. This is the consequence of Serbia being considered as a safe third country by the government, in contradiction to UNHCR’s position that Serbia should not be considered as such. In practice, as almost all asylum seekers came to Hungary via Serbia, this constitutes a serious obstacle to international protection and creates a real risk of refoulement of asylum seekers in breach of European Convention on Human Rights and 1951 Refugee Convention requirements.

The increasing recourse to detention of asylum seekers and Dublin returnees is also highly problematic. Further to his visit to the Debrecen asylum detention centre, the Commissioner expressed his deep concern at the risk of arbitrariness and the quality of judicial review of decisions on whether to detain persons seeking international protection. “The use of detention of asylum seekers has increased again in recent months and this is particularly worrying given the very restrictive detention regime applied to these persons who should be treated in a more humane way and not as if they were criminals”, said the Commissioner. The absence of a reliable system for identifying vulnerable applicants, such as victims of torture and human trafficking or those suffering from post-traumatic stress disorder in asylum detention was considered to be of particular concern. While vulnerable persons are in principle exempted from asylum detention, the Commissioner was struck by reports that some persons who were likely minors have been placed in detention as a result of highly questionable age-assessment tests. He urged the authorities to improve detention conditions and to put in place a rigourous system of identification of all special needs to ensure that vulnerable people are not placed in detention. He also called for an effective judicial review of the lawfulness of asylum detention as foreseen by the European Convention on Human Rights.

Finally, the Commissioner stressed that in addition to the necessary review of recent changes of legislation applicable to immigrants, refugees and asylum-seekers, the government and political leaders should refrain from using xenophobic rhetoric linking migrants to social problems or security risks, thereby making the integration of the few migrants staying in the country even more problematic. “Instead of resorting to a discourse likely to fuel anti-migrant sentiment among the general public, the government should put in place a genuine, fully-fledged programme of integration that would ensure migrants’ acquisition of the Hungarian language and access to housing, employment and other social rights”.