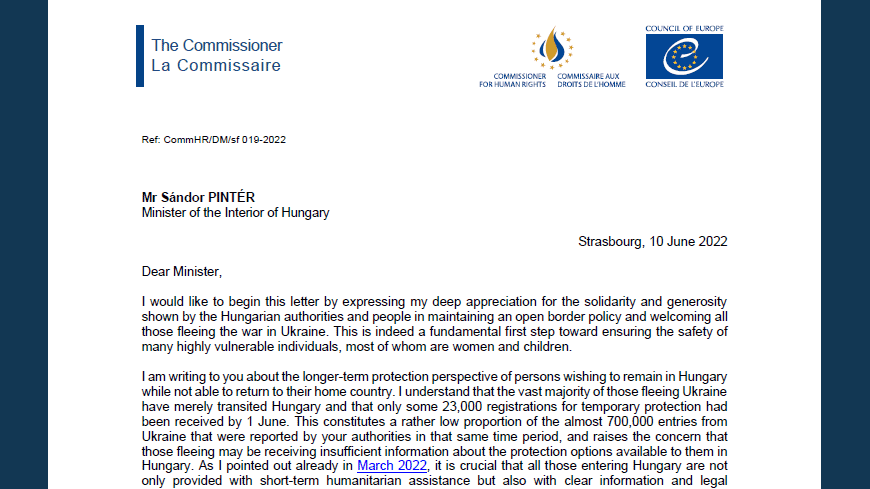 In a letter addressed to the Hungarian Minister of the Interior published today, Commissioner Mijatović expresses her appreciation for the country’s open border policy for those fleeing Ukraine but raises concerns about the longer-term protection perspective of third country nationals and stateless persons, who are excluded from the temporary protection scheme and have no possibility to apply for asylum in the country.

So far, third country nationals and stateless persons have been issued with humanitarian residence permits for 30 days, which are usually extendable but carry no benefits, while the Hungarian border police continues to report daily removals to Serbia of persons coming from war-torn countries such as Syria, Afghanistan, or Iraq. “The sustained rhetoric by government officials of differentiating Ukrainians as ‘real refugees’ and portraying those fleeing atrocities and war elsewhere as economic migrants is problematic and contradictory to the core principle that human rights exist to protect everyone, in the same way, whatever their national or ethnic origin, colour, or belief,” writes the Commissioner.

The Commissioner urges the Minister to pursue the establishment of an asylum system in line with Hungary’s international protection obligations, for the benefit of those fleeing Ukraine who do not fall under the temporary protection scheme and for everyone else who seeks the fair and thorough assessment of their eligibility for asylum in Hungary.