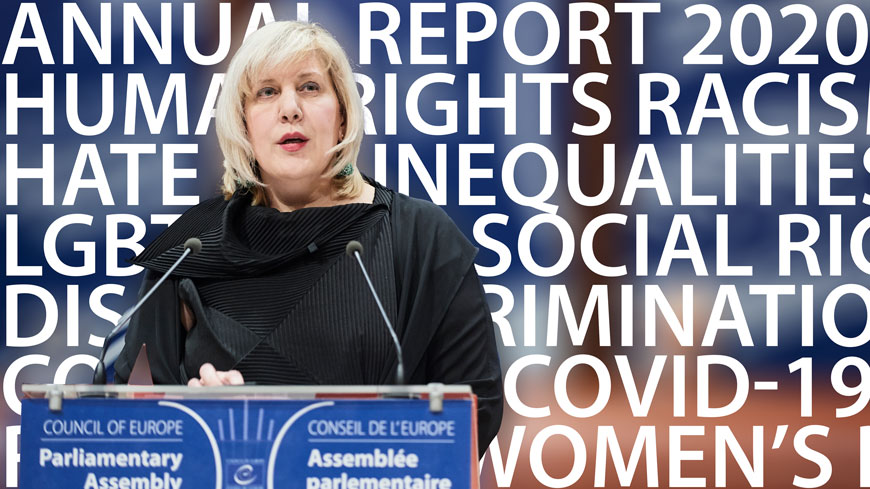 “The COVID-19 pandemic has accelerated the erosion of the democratic fabric of our society on which the protection of human rights ultimately depends”, warned Council of Europe Commissioner for Human Rights, Dunja Mijatović, while presenting today her annual activity report covering 2020 before the Parliamentary Assembly of the Organisation.

While her report covers a vast array of topical issues concerning the human rights protection challenges Europe is facing and the worrying erosion of the rule of law in many member states, the Commissioner emphasised how long-standing and neglected problems have been exacerbated by the health crisis and its consequences. “The pandemic has revealed with tragic clarity the many and growing inequalities that exist in our countries”, she said highlighting the price paid by many disadvantaged groups.

To inspire hope despite a still raging pandemic, the Commissioner reiterated her call to build urgently more inclusive and resilient health care systems and underlined the need to make vaccinations, as well as testing and treatment, accessible to all. “This is both a crucial step to defeat the pandemic and a test of the political will to address the deeply embedded structural weaknesses and inequalities of public health systems in Europe”.

The Commissioner also emphasised how the pandemic has exposed the urgency of reforming mental health care and invited member states to speed up their transition from an institution and coercion-based, biomedical model of mental health towards a community-based and recovery-oriented model based on consent.

As regards women’s rights, the pandemic has served as a magnifying glass on persisting violence against women, gender inequalities and barriers in women’s access to sexual and reproductive health care. “Protecting women’s rights and promoting gender equality is a litmus test for member states’ commitment to human rights. It is our shared duty to ensure that none of the Council of Europe member states fails women and girls”, said the Commissioner. She underscored the need to ratify and implement the Council of Europe Convention on preventing and combating violence against women and domestic violence, warning against attempts to undermine it through spreading of misconceptions or fallacious and uninformed claims about it.

The Commissioner also expressed concerns about the increasing pressures on human rights defenders, especially those working to combat Afrophobia, safeguard the environment or protect the rights of LGBTI people. “Instead of clamping down or ignoring human rights defenders, national authorities should support their work and cooperate with them. It is both a legal and a moral duty”, she declared.

She also called for the recognition of the particularly grave forms of racism and racial discrimination to which people of African descent continue to be exposed and for effective measures against Afrophobia.

The Commissioner renewed her distress call for human rights in the Mediterranean. “The worsening backsliding in the protection of the lives and rights of refugees and migrants at sea is causing thousands of avoidable deaths each year”, she regretted.

She concluded by calling for unity and solidarity and for “a renewed impetus to narrow the gap between human rights standards and reality.”