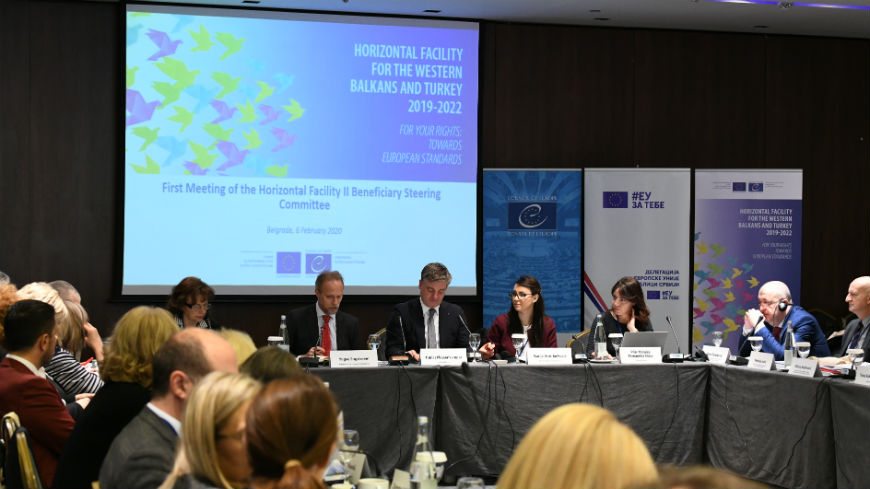 Citizens of Serbia need enhanced protection of their rights, more accountable and independent justice system and to keep building more democratic, tolerant and inclusive society, where media freedoms are guaranteed, and media pluralism is ensured. Therefore, continuous efforts of Serbian authorities towards alignment with European standards, supported by the European Union and the Council of Europe, are crucial. This has been underlined in today’s first meeting of the Beneficiary Steering Committee of the joint EU/CoE programme “Horizontal Facility for the Western Balkans and Turkey 2019-2022”.

Tobias Flessenkemper, Head of the Council of Europe Office in Belgrade welcomed participants and underlined that in a year marking the 70th anniversary of the European Convention on Human Rights, it is necessary to keep addressing existing challenges by providing tailor-made support to Serbia to advance its reform agenda.

On this occasion Marija Oros Jankovic, Horizontal Facility Beneficiary Co-ordinator from the Ministry of European Integration, emphasised the special value of this Programme, since it provided the Council of Europe's expert support in the reform areas of particular importance for the citizens, as well as for the process of European integration of Serbia. “The reform process within chapters 23 and 24 is, by scope and depth, the most important and most demanding one. It is reflected in changes of behaviour of citizens and it involves the whole society. For that reason, involvement of the Council of Europe in the process is crucial, having in mind its standard setting and monitoring role. The first phase of the Horizontal Facility Programme has yielded exceptionally good results and it has laid a good foundation for continued joint efforts in this field”, said Ms Oros Jankovic.

Head of Co-operation at the Delegation of the European Union to Serbia Yngve Engstroem underlined that the Horizontal Facility has proven to be a successful tool for enhancing co-operation between the EU and the Council of Europe, but these two organisations are not the most important actors. “We can already see strong national ownership of the reform process supported through this programme. Also, under this horizontal umbrella we have had mutual learning and peer-to-peer learning, but we still need to explain better to citizens about all the benefits of this programme”, said Mr Engstroem.

“Through the CoE/EU partnership, we continue assisting Serbia in advancing its European integration process, rooted in the commitments on human rights, rule of law and democracy that the country already undertook when it joined the Council of Europe back in 2003”, said Ms Pilar Morales, Head of the Programming Department, Office of the Directorate General of Programmes of the Council of Europe. “The ownership and commitment of national partners and the institutional follow up are crucial for the success of the programme. I would like to encourage our partners in Serbia to take full advantage of the Horizontal Facility, as well as of the Expertise Co-ordination Mechanism to further advance the European integration process”, she concluded.

The second phase of this programme to be conducted between 2019 and 2022 and worth €41 million, builds on the results of the first phase and will continue to develop important initiatives in Serbia and in all the Western Balkans Beneficiaries including Albania, Bosnia and Herzegovina, Kosovo*, Montenegro, North Macedonia, as well as Turkey. In Serbia, 5.4 million euros have been allocated for seven actions, covering the key areas of the Horizontal Facility: ensuring justice, combating discrimination and protecting rights of vulnerable groups, ensuring quality education for all, as well as freedom of expression and freedom of the media.