“Eradicating torture in Europe”: Council of Europe anti-torture Committee holds exchange of views with members of the Parliamentary Assembly

français
The President of the Council of Europe’s Committee for the Prevention of Torture and Inhuman or Degrading Treatment or Punishment (CPT), Mykola Gnatovskyy, and the CPT’s 1st Vice-President, Mark Kelly, took part in a joint meeting of the Parliamentary Assembly’s Committee on Legal Affairs and Human Rights and the Committee on the Honouring of Obligations and Commitments by Member States of the Council of Europe (Monitoring Committee).
04/10/2019 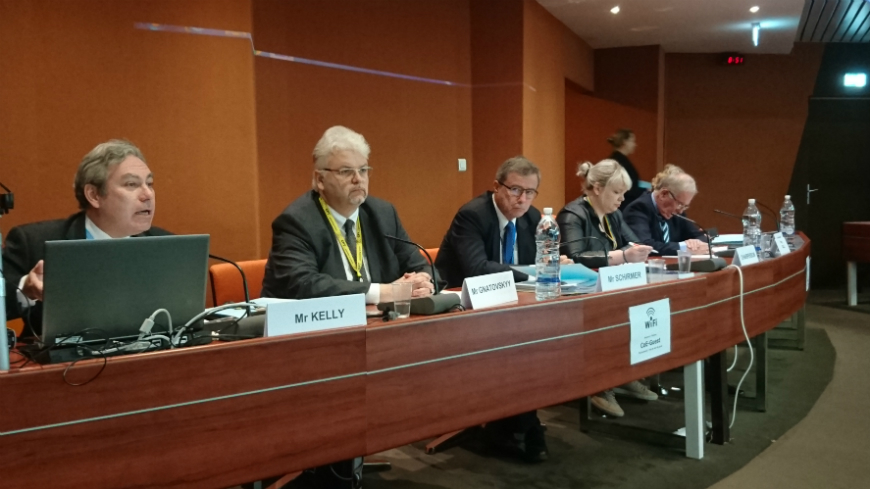 In his opening remarks, Mykola Gnatovskyy highlighted major challenges faced by the CPT throughout Europe and summarised key issues raised in its most recent annual report, including its relations with the United Nations Subcommittee on Prevention of Torture (SPT), as well as the concept of investigative interviewing by the police and procedural safeguards against police ill-treatment.

Mark Kelly explained the purpose and highly exceptional nature of “public statements” issued by the CPT (under Article 10, paragraph 2, of the Convention establishing the CPT) and stressed the important role the Parliamentary Assembly and national parliaments can play to follow up CPT recommendations and public statements. He paid particular attention to the latest public statement on the Russian Federation which had been made by the CPT in March 2019, due to the lack of action by the Russian authorities to eradicate the widespread phenomenon of torture and other forms of ill-treatment by law enforcement agencies in the Chechen Republic and other republics of the North Caucasian region.

Agenda of the meeting