Why remembering the Holocaust is a human rights imperative 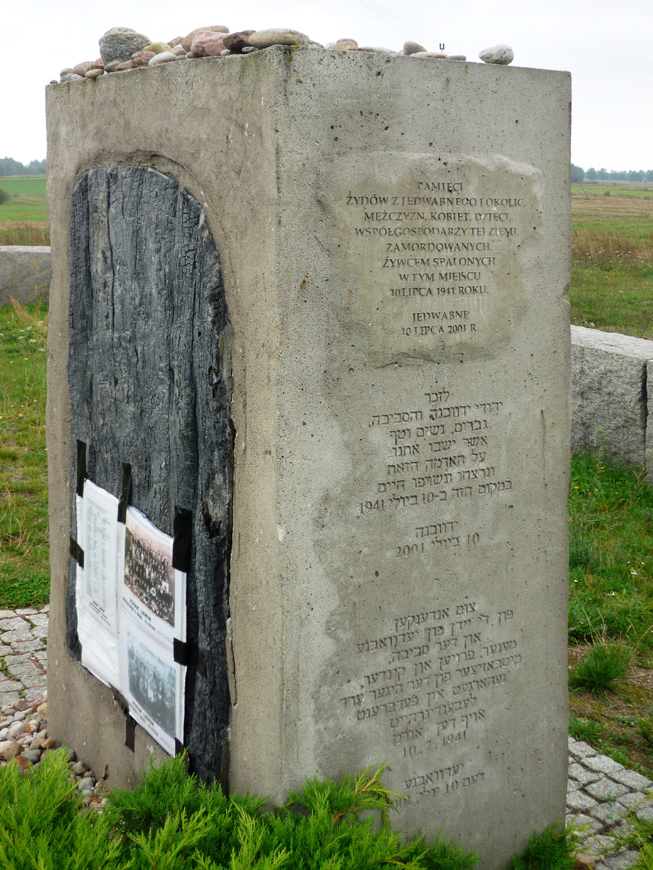 Memorials constitute important safeguards against history and serious human rights violations repeating themselves. The photo above shows one such memorial (monument unveiled by the Polish authorities in 2001 to commemorate the massacre of Jews in Jedwabne in 1941)

The Shoah stands out as one of the defining moments of history that has shaped the conscience of mankind. It is unique in its roots, implementation and envisioned totality. During my mandate as Commissioner for Human Rights, I have attended a number of ceremonies of commemoration of the victims of the Shoah, not only in Strasbourg, but also in Albania and Greece , to highlight that it is our duty to remember the past in order to remain vigilant for the future. Teaching remembrance of the Holocaust is a crucial safeguard against history and serious human rights violations repeating themselves.

Remembrance lies at the roots of the Council of Europe. It was founded out of a collective determination to overcome past hatred and conflict and to promote peace, democracy and human rights. Acknowledging and coming to terms with the past is essential. Worrying trends in antisemitic hate speech and hate crime are important issues which I have raised with member states during my country monitoring missions and in my visit reports (see, for example, my report to France in 2015;  to Hungary in 2014; to Georgia in 2014 and to Greece,  in 2013). Since 2015 I have tried to meet with representatives from Jewish communities during these monitoring visits to listen to their concerns and get a clearer picture of contemporary antisemitism in Europe.

When I wrote in my 2012 address in Tirana that antisemitism was still very much alive in Europe, I had in mind, of course, the horrendous attack against the Jewish Ozar Hatorah School in Toulouse in March 2012. Little did I know then that 2014 would see the murder of four people during an attack on the Belgian Jewish museum and the killing of four hostages in a Paris kosher supermarket and a young Jewish security guard at a ‎Copenhagen synagogue in 2015.

According to the European Union’s Fundamental Rights Agency survey of data published in October 2015, antisemitism remains an issue of serious concern which demands decisive and targeted policy responses. The Internet and the explosion of on-line hate speech have only exacerbated an existing problem.

Outright denial of the Holocaust still exists in Europe. Under the International Convention on the Elimination of all Forms of Discrimination (Article 4) states are bound to sanction racist hatred and violence. Moreover, according to the European Union’s Framework Decision from 2008 publicly condoning, denying or grossly trivialising crimes of genocide, crimes against humanity and war crimes should be punishable as criminal offences.  I noted in my 2013 report on Greece that regrettably the Greek courts did not manage to do this in an important case concerning the publication in 2006 of a book by Kostas Plevris, a politician with an openly Nazi ideology, which was manifestly anti-Semitic and incited to hatred and violence against Jews. Despite the ex officio prosecution and the author’s first instance conviction the Athens Appeal Court and the Court of Cassation acquitted him. I was dismayed to read last month that the Slovak MP, Milan Mazurek, will not be prosecuted for saying that the Holocaust is a "fairy tale and a lie”.

Negationism and Revisionism before the European Court of Human Rights

The Strasbourg Court has taken a robust approach to Holocaust denial. On a number of occasions it has excluded Holocaust denial from the protection of Article 10 using the ‘abuse of rights’ clause under Article 17. Under this clause an applicant is not entitled to rely on the protection of the European Convention on Human Rights because his acts are deemed to be incompatible with the fundamental values which the Convention seeks to promote.

In the case of Garaudy v France, the applicant, an author of a book entitled ‘The Founding Myths of Modern Israel’ was convicted of disputing the existence of crimes against humanity, defamation of the Jewish community and incitement to racial hatred. He argued that his right to freedom of expression had been infringed. The Court declared his application inadmissible. It considered that the content of his remarks had amounted to Holocaust denial and pointed out that denying crimes against humanity was one of the most serious forms of racial defamation of Jews and incitement to hatred of them.

The multiple facets of Holocaust denial in Europe

Yet denial has many facets, and also includes minimization, trivialisation or distortion of the Holocaust.  Last year, the European Court of Human Rights rejected as inadmissible a claim brought by a comedian and political activist, known by the stage name “Dieudonné” ( M’Bala M’Bala v France). Under cover of a comedy show, the applicant invited one of the best known French negationists, Robert Faurisson, who had been convicted a year earlier for denying crimes against humanity, in order to pay tribute to him and give him a platform. In the context of a preposterously grotesque mise en scène he arranged for an actor playing the role of a Jewish inmate of a Nazi concentration camp, dressed in striped pyjamas with a star of David, to award Robert Faurisson a prize. The Strasbourg Court was of the view that the purported show was a demonstration of hatred and antisemitism, supportive of Holocaust denial.

Some examples of distortion of the Holocaust were given in the “Working Definition of Holocaust Denial and Distortion” at the International Holocaust Remembrance Alliance’s Plenary meeting in Toronto in 2013. These include intentional efforts to excuse or minimize the impact of the Holocaust or its principal elements, including by collaborators and allies of Nazi Germany and attempts to blur the responsibility for the establishment of concentration and death camps by putting blame on other nations or ethnic groups.

During my recent visits and continuous monitoring of some post-Communist Eastern European states, I have been confronted with a number of nuances of Holocaust distortion in the form of revisiting or rewriting history. A number of States are struggling to come to terms with the role that local populations played in relations with the Jews.

During my visit to Croatia this year I was made aware of attempts by some nationalist politicians to relativize the crimes committed by the Ustasha regime. For example, the number of victims of the Jasenovac concentration camp has been officially called into question.

During my June 2015 visit to Slovakia I was alarmed to hear about attempts in some quarters to rehabilitate the Slovak fascist wartime state (a satellite of Nazi Germany during World War II) and its leading politicians, with the deportation of 70 000 Slovak Jews to death camps being called a historical lie.

I was concerned at the comments of the Polish Education Minister who in a recent interview refused to acknowledge that Polish citizens were responsible for killing their Jewish neighbours during antisemitic pogroms in Jedwabne and Kielce during and after World War II. The remarks came shortly after the 75th anniversary of the massacre at Jedwabne, where, on July 10, 1941, about 350 Jews were murdered by their Polish neighbours while the town was under Nazi occupation.

European states must act resolutely against all forms of antisemitism

Europeans ignore the evidence of rising antisemitic hate speech, violence and Holocaust denial at their peril. The hate that begins with Jews never ends with Jews. This was the message of the former chief Rabbi of the UK to a group of MEPs and representatives from Jewish communities gathered in the European Parliament last month. The public denial, trivialisation, justification or praise of the Holocaust, of crimes of genocide and of crimes against humanity should be made a criminal offence, where this is not yet the case. An informed and honest discussion of past co-operation and collusion in the execution of Jews committed on national soil is necessary for coming to terms with a violent past. Political figures and political parties should also be prosecuted for antisemitic statements and incitement to hatred.

States should encourage Internet service providers and social media to take specific action to prevent and combat online hate speech. Moreover, States that have not done so should acced to the 2003 Additional Protocol to the Convention on Cybercrime, concerning the criminalisation of acts of a racist and xenophobic nature committed through computer systems.

The teaching of the Holocaust should be made an integral part of the curriculum at secondary level with teachers given specific training. Educational programmes should emphasise the link between current manifestations of hatred and intolerance and the Holocaust.

Antisemitism is a threat to our European continent built on freedom and the rule of law.It is only by facing up to the past that we can look with hope and confidence to the future.