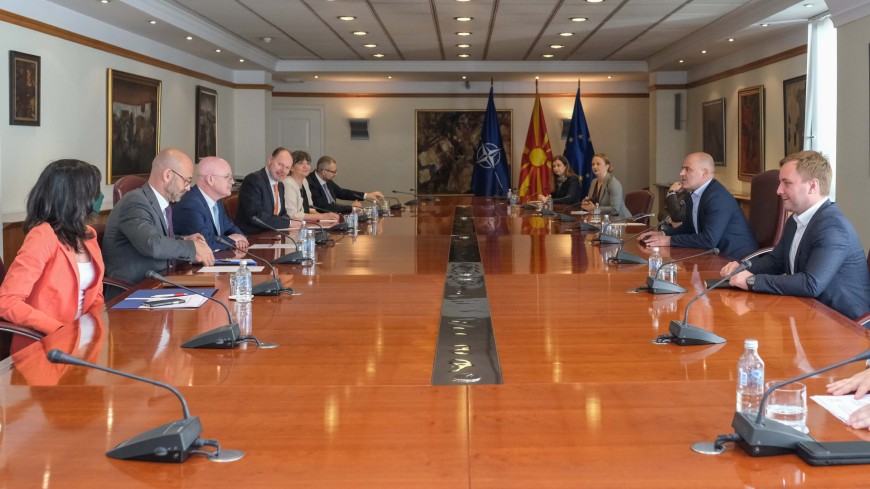 On 16 May 2022, the President of the European Committee for Prevention of Torture and Inhuman or Degrading Treatment or Punishment (CPT), Alan Mitchell, and the Vice-Governor of the Council of Europe Development Bank (CEB), Tomáš Boček, have met the Prime Minister of North Macedonia, Dimitar Kovačevski, to exchange on prison reform.

They urged government officials to pursue their commitment to develop a professional prison service in line with the CPT Recommendations.

In talks held with Prime Minister, Dimitar Kovačevski, Minister of Finance, Fatmir Besimi, and Minister of Justice, Nikola Tupančevski, the CPT and CEB delegation reiterated the need to establish clear reporting lines and effective management oversight in the prison service.

“Prisons are complex institutions which require professional managers and staff to run them,” said President of the CPT, Alan Mitchell. “In order to effectively prevent ill treatment, North Macedonia has a duty to ensure that all persons in prison are treated with dignity and provided with decent living conditions.”

CEB Vice-Governor Tomáš Boček brought up the effective implementation of the loan agreement between the CEB and Government of North Macedonia for the rebuilding of the Idrizovo prison, including the construction of a pre-trial detention facility. “We encouraged the authorities of North Macedonia to address the outstanding issues with respect to penitentiary institutions, particularly the Idrizovo Prison,” he said. “I would like to reiterate the CEB interest to support North Macedonia in dealing with development challenges through social and effective projects.”

Consultations were also held, on 17 May 2022, with Ambassador David Geer, head of the Delegation of the European Union to North Macedonia, on the importance of prison reform as a key aspect of the justice system.

The President of the CPT and the Vice-Governor of the CEB were accompanied by Hugh Chetwynd and Christian Loda of the CPT’s Secretariat, and Sonay Kanber from the CEB.