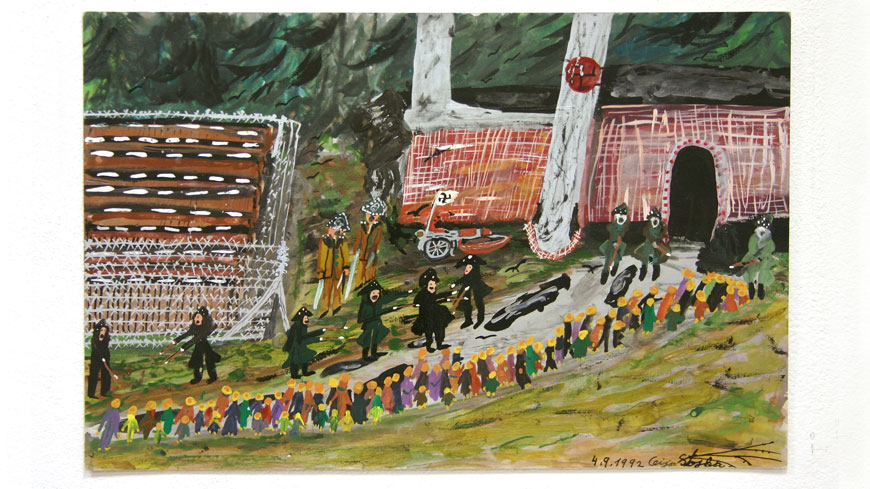 Death - Roma Train to Auschwitz-Birkenau (1992) painting by Ceija Stojka (1933-2013), Roma artist, Holocaust survivor who bore witness of the camps and spoke out against denial and forgetting, and against the antigypsyism pervasive in Europe. Art work from the collection of the Museum of Romani Culture, Brno. Courtesy of European Roma Institute of Arts and Culture (ERIAC).

Ahead of the European Roma Holocaust Memorial Day on 2 August, the Council of Europe Commissioner for Human Rights, Dunja Mijatović, calls on all states to recognise past and present human rights violations affecting Roma people and to step up efforts to ensure the protection their rights in all fields of life.

“The European Roma Holocaust Memorial Day is a day for both remembrance and action.

On this day, we pay our respects to the hundreds of thousands of Roma who were killed during the Second World War, many of them deported and exterminated in concentration camps while others were victims of painful medical experiments.

Member states must all recognise the importance of exploring and exposing the history of Roma in Europe. They can do so by supporting remembrance of the Roma Holocaust as a tool to keep the memory of the victims alive and to reflect on the legacy of atrocities committed against Roma. Some states have taken positive steps in that direction. In the Czech Republic, the recent undertaking of the demolition of the pig farm on the site of the former Nazi concentration camp for Roma of Lety u Pisku will make way for a museum dedicated to the remembrance of the victims and survivors of the Roma Holocaust.

But remembering is also addressing the need to tackle the deep-seated prejudices and stereotypes that fuel the pervasive discrimination Roma people are still facing today in our societies, against a backdrop of continuing hate speech and hate crimes.

We must acknowledge that it is the persistence of racism that leads to the repetition of human rights violations, as shown by Roma’s limited access to basic services in the context of the COVID-19 pandemic and by the discrimination they faced while fleeing the war in Ukraine.

We must confront antigypsyism and strengthen efforts to ensure the inclusion and participation of Roma in our societies.”