Malta should strengthen the protection of the media and access to information, in line with international standards 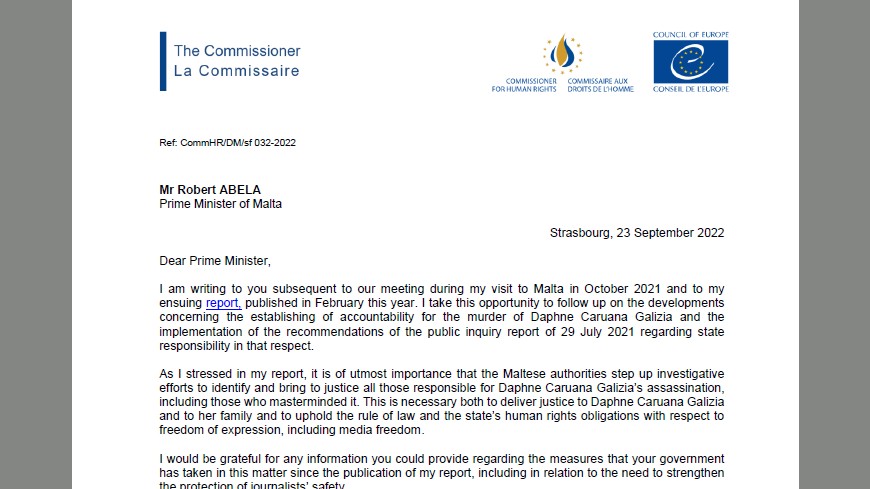 “The Maltese authorities must ensure that legislative work launched pursuant to the public inquiry report into the assassination of Daphne Caruana Galizia complies with international standards and is fully open to public scrutiny and participation”, said today the Council of Europe Commissioner for Human Rights, Dunja Mijatović, publishing an exchange of letters with the Prime Minister of Malta, Robert Abela.

“The recent publication by the government of its legislative proposals concerning the media sector and certain restrictions on the use of SLAPPs is a step in the right direction. It is now crucial to secure a broad public consultation to include the views of civil society and of the journalism community in this legislative process. The Maltese authorities should seize this opportunity to adopt comprehensive legislation affording extensive protection to journalists”, she added.

In her letter, the Commissioner reiterates the utmost importance of stepping up investigative efforts to identify and bring to justice all those responsible for Daphne Caruana Galizia’s assassination and stresses that this is also necessary to uphold the rule of law and Malta’s human rights obligations with respect to freedom of expression, which includes media freedom.

Expressing concerns about the continued difficulties that journalists face in accessing information of public interest and the use of SLAPPs by state agencies in response to freedom of information requests, the Commissioner recommends that the authorities “avoid taking measures that may impinge on media freedom and the public’s right to know”.

Lastly, recalling the need to ensure accountability and transparency at all stages of the reform process, the Commissioner urges the government to set out a plan with defined objectives and timings to implement the recommendations of the public inquiry report and communicate it clearly to the public.