Invest in education and language acquisition to build a cohesive society, says Commissioner Muižnieks in Skopje 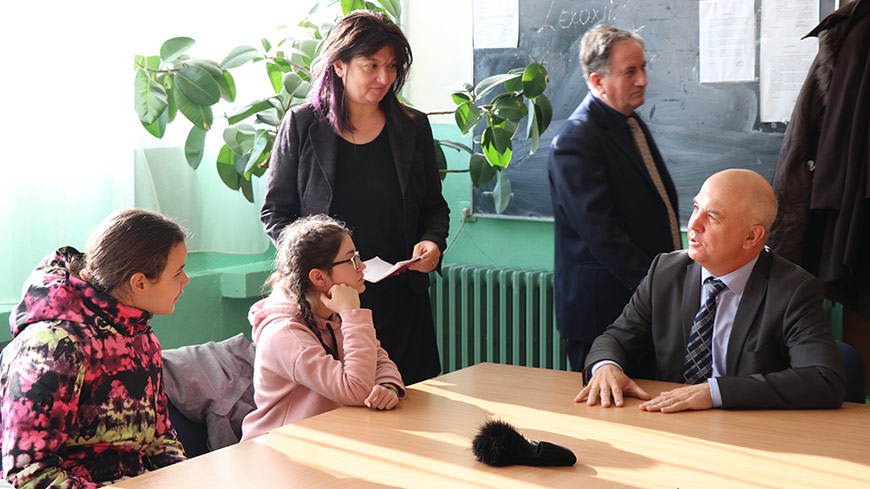 “The Macedonian authorities should implement policies that encourage interaction and understanding between ethnic communities and promote social cohesion while protecting diversity,” said the Council of Europe Commissioner for Human Rights, Nils Muižnieks, after a five-day follow-up visit to “the former Yugoslav Republic of Macedonia” between 29 January and 2 February.

The peace agreement that ended an inter-ethnic conflict in 2001 has led to changes, for example, in the fields of equitable representation of communities in public institutions, decentralisation and the use of languages. However, social cohesion has not been achieved. “Macedonian society remains deeply divided along ethnic and linguistic lines and it is high time for political leaders to devise an integration strategy to overcome these divisions,” said Commissioner Muižnieks.

The Commissioner was particularly concerned about increased separation between ethnic Macedonian and ethnic Albanian children, who have little opportunity to meet, learn and play together because the education system is divided according to language of instruction. Separation breeds mistrust, stereotypes and prejudices. The Commissioner visited two schools in Tetovo and one in the Shuto Orizari neighbourhood in Skopje. He learned with interest about the implementation of projects in some schools that enable children to mix in joint extra-curricular activities. While encouraging the authorities to continue these projects, the Commissioner also urged them to develop a more systematic and long-term policy to avoid separation between children from different ethnic communities in the education system. He also urged the authorities to promote possibilities from an early age to learn the Macedonian language for all children and Albanian and other non-majority languages in areas where such communities live in significant numbers.

“Children are the future and it is crucial, in a multi-ethnic society, to give them the possibility and skills to build mutual understanding, respect and tolerance. Instead of keeping them apart, the education system should provide them with an environment which allows and encourages interaction”, the Commissioner said. “Inclusive and integrated education is not a utopian goal. The central and local authorities should support such an education system, including through proper outreach to parents and communities, so that children of all ethnic groups, as well as children with disabilities, have the opportunity to meet, and learn about and from each other.”

The Commissioner encouraged the authorities to enhance their efforts to include children with disabilities in regular schools. He stressed that this requires the education system to adapt to the needs of the children. “Inclusive education benefits both children with disabilities but also society as a whole,” the Commissioner said. The Commissioner also welcomed the work done to re-evaluate Roma children who may have been wrongly directed to special schools, a situation which violates their rights and perpetuates the marginalisation of Roma, and to reintegrate them in regular schools.

The Commissioner also used the opportunity of the follow-up visit to encourage the authorities to take concrete action in a range of human rights related areas where the country has made commitments and adopted strategies, but where progress has been slow. As regards the planned changes to the law against discrimination, the Commissioner welcomed amendments to extend the list of grounds of discrimination to include sexual orientation and gender identity, and to strengthen the functioning of the Commission for the Protection against Discrimination. “Preventing and responding firmly to discriminatory attacks and behaviours is critical to achieve social cohesion,” stressed the Commissioner.

The Commissioner also recommended intensifying efforts to safeguard against police violence or misconduct affecting persons deprived of their liberty, protesters, or migrants, notably through the establishment of an Independent Police Oversight Mechanism. The Commissioner further urged the authorities to end human rights violations at the country’s borders, including pushbacks and trafficking of migrants and asylum seekers. He welcomed efforts by the authorities to eliminate ethnic profiling of Roma at the borders to prevent them from leaving the country and encouraged them to urgently craft policies to support people who are returned from third countries and may face challenges to reintegrate in Macedonian society and the education system.

The Commissioner stressed the importance of effectively investigating and prosecuting hate crimes, including against journalists or members of the lesbian, gay, bisexual and transgender community. Finally he welcomed the authorities’ current efforts to finalise the process of de-institutionalisation of persons with disabilities, which has been under way since several years in the country.

“I welcome an improved atmosphere in the country to advance human rights,” said Commissioner Muižnieks. “Political leaders have the responsibility to seize this moment to achieve real change so that all members of the Macedonian society can enjoy their human rights.”

The Commissioner conducted a first visit to “the former Yugoslav Republic of Macedonia” in November 2012, which focused on social cohesion and transitional justice, as well as the human rights of Roma, and was followed by a report.