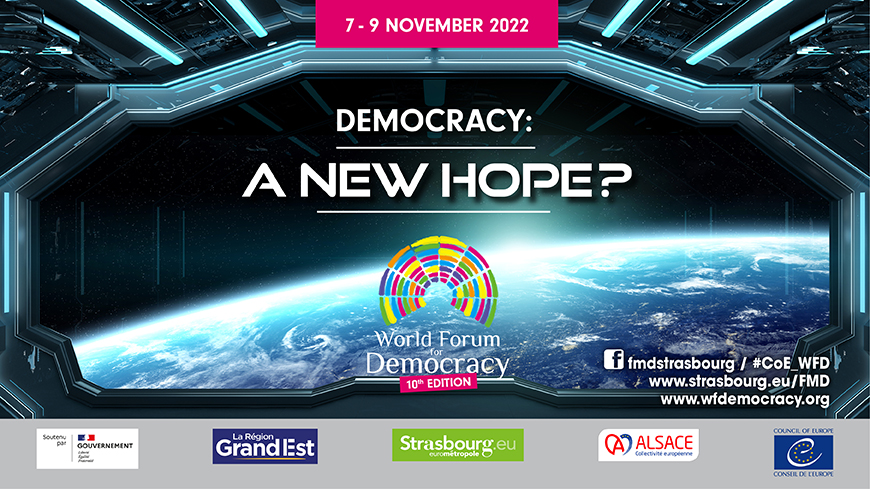 “Democracy: A new hope?” is the theme of this year’s World Forum for Democracy, which is celebrating its 10th anniversary. The event, taking place from 7 to 9 November at the Council of Europe in Strasbourg, will bring together intellectuals, politicians, activists, experts and young people from all over the world to discuss the factors contributing to democratic decline and how these can be addressed.

Many leading public figures will participate in this year’s event: Katrin Jakobsdóttir, Prime Minister of Iceland and Simon Coveney, Minister for Foreign Affairs of Ireland will each give a special address; Salome Zurabishvili, President of Georgia, Sviatlana Tsikhanouskaya, leader of the Belarusian democratic movement, Olivier Véran, French Government Spokesperson and Minister for Democratic Renewal, Olexander Kornienko, Deputy Speaker of the Ukrainian Parliament and Lucian Romaşcanu, Minister of Culture of Romania, as well as Club of Madrid members, the former President of Mongolia, Tsakhia Elbegdorj, and the former President of Chile, Ricardo Lagos, will all participate in the opening day of the Forum.

Ten lab sessions, which will address the challenges from different angles and present some measures which have already been put into practice, will help to identify a democratic response to the issues raised throughout the Forum. On Wednesday 9 November the Council of Europe Democracy Innovation Award will be presented to the most popular initiative presented in the labs.

The programme also includes a series of Forum talks on Youth to the Rescue?; History and Education – Knowledge and Manipulation; Persuasion or Polarisation?; Discrimination and Privilege – Are Inequalities Unravelling Our Societies?; Corruption and Accountability – Keeping Faith in Democracy; Deliberation: a Booster for Democracy?; The Missed Opportunity of Democracy in Russia; and the Impact of Impunity on Journalism and Democracy.

The Forum is organised by the Council of Europe in partnership with Strasbourg City Council, the European Collectivity of Alsace, the Grand Est Region and the French Government. Since 2012, the World Forum for Democracy has become an annual opportunity for citizens around the world to reflect on democracy, to analyse its shortcomings and limitations, but also to generate new ideas to respond to the challenges facing democracy. (read more ...)