Czech Deputy Public Defender of Rights: I hope the law to compensate victims of forced sterilization will soon be adopted 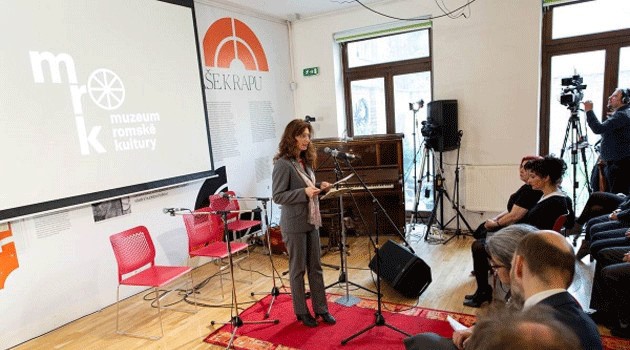 On Saturday, 7 March 2020, at the Museum of Romani Culture, the annual commemoration was held of the 77th anniversary of the first mass transport of Romani people from the Protectorate of Bohemia and Moravia in 1943 from the slaughterhouse on Masná Street in Brno to the death camp of Auschwitz II-Birkenau. Approximately 1 000 Romani children, men and women were forcibly transported at that time.

The vast majority of those people never returned. On the occasion of the commemorative ceremony, Czech Deputy Public Defender of Rights Monika Šimůnková gave the following speech, which is being published here in full translation.

It is my great honor to be here together with you all and to honor the memory of the Holocaust and its Romani victims, something we must never be allowed to forget.

Romani people in our country have never had it easy. Laws and regulations targeted them under the Austro-Hungarian Empire, the First Republic of Czechoslovakia, and the Protectorate of Bohemia and Moravia. The previous regime also did its best to suppress them. No sooner had that regime fallen then a wave of murders motivated by racism, a wave of neo-Nazism, rose up during the early 1990s.

Today, a couple of decades later, we have excluded localities and segregated schools in our country. Many public officials continue to be unashamed about making racist statements and playing the card of collective blame, as if it were somehow impossible for us to ever learn from the past.

Seventy-seven years ago, the first transport of more than 1 000 Romani people set off from Brno for the Auschwitz concentration camp. Other transports followed of Romani men, women and children. Most of them never returned.

Their fate was sealed because they were born Romani. For centuries, majority society had excluded them from its ranks. This was done through words and through deeds.

We must also never forget that later, after the horrors of the Holocaust had been lived through, another significant violation of human rights began to happen, the violation of the personal integrity of the many Romani women who were forced to unlawfully undergo sterilization. According to the report from the ombudsman in the year 2005 and subsequent investigations by nonprofit organizations, there are hundreds of such cases that to this day have yet to be redressed. I firmly believe that we will soon see the adoption of a law that has been advocated for many years, the wording of which I have worked on, a law that is currently in the Chamber of Deputies awaiting adoption. That legislation would at least financially redress the victims of this shameful crime.

When it comes to such past debts, it is necessary to appreciate that at least in the case of the memorial at Lety u Písku there has been enormous progress, and the Czech Government has made a big step toward a greater degree of dignity for that remembrance site.

Dear Ladies, Dear Gentlemen, no crime ever happens in a vacuum. Almost 80 years ago, it was specific individuals who chose the Romani people and led them away. Other specific individuals dispatched the trains, others held them in the concentration camps from where they were sent to their deaths. Many people did what they did because they were ordered to do so, and in the machinery of the system they did not reflect very much on what it was they were being asked to do, or they were afraid not to act. In every era, people frequently act and speak without being aware of the consequences of their actions.

We could learn from that a bit, maybe. We could reflect for a moment, perhaps, about whether we are saying something that harms others, that hurts them, that creates the preconditions for far worse crimes in the future, ones that we frequently are unable to predict.

We who are alive today can hardly correct the crimes of the past. However, we can behave in such a way as to at least avert or avoid any injustice, either current or future, from happening on our watch.

In my position as Deputy Public Defender of Rights, I will endeavor to contribute to averting and avoiding injustice to the best of my ability.
2020-03-11T09:33:00