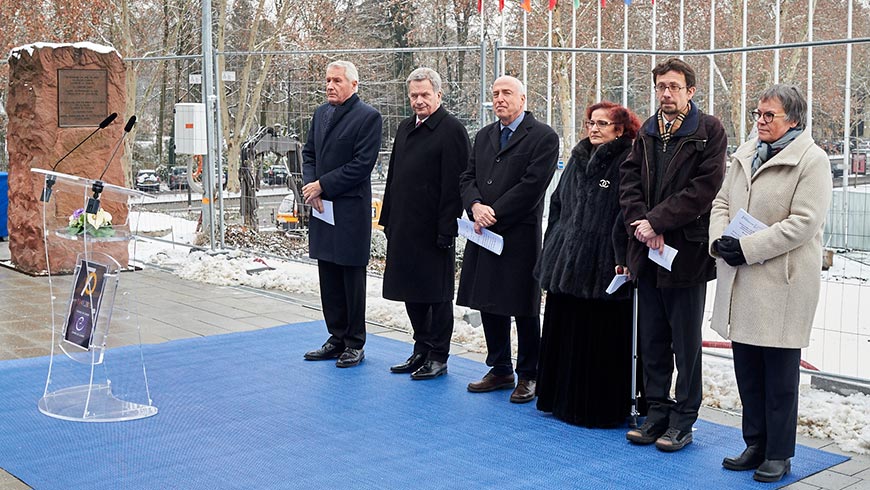 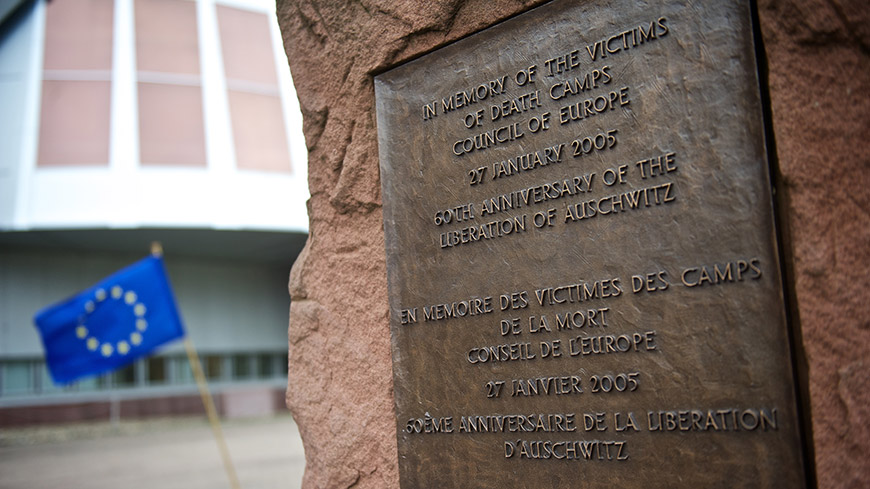 Secretary General Thorbjørn Jagland today opened a series of ceremonies to mark the International Day of Commemoration in Memory of the Victims of the Holocaust.

In front of the commemorative stone on the forecourt of the Palais de l’Europe, addresses and wreath-laying were also made by Nicos Anastasiades, President of the Republic of Cyprus, Klaus Werner Iohannis, President of Romania; Carmel Shama-Hacohen, Ambassador of Israel to the international institutions in France, Miranda Vuolasranta, President of the European Roma and Travellers Forum and Denis Erhart, President of "Les Oublié(e)s" de la Mémoire Association Civile Homosexuelle du Devoir de Mémoire. Closing remarks were made by Pedro Agramunt, President of the Parliamentary Assembly.

Commemoration ceremonies and Remembrance events will also take place in several member states with the support of their Council of Europe field offices.

The exhibitions “Education and Remembrance - The Holocaust in Romania” and “There was a life” will be on display at the Ante-Room of the Committee of Ministers, and a training activity for school children will be held at the European Youth Centre in Strasbourg on 26 January.

See also:
Statement by the Chair of the Committee of Ministers, Ioannis Kasoulides, Minister for Foreign Affairs of Cyprus 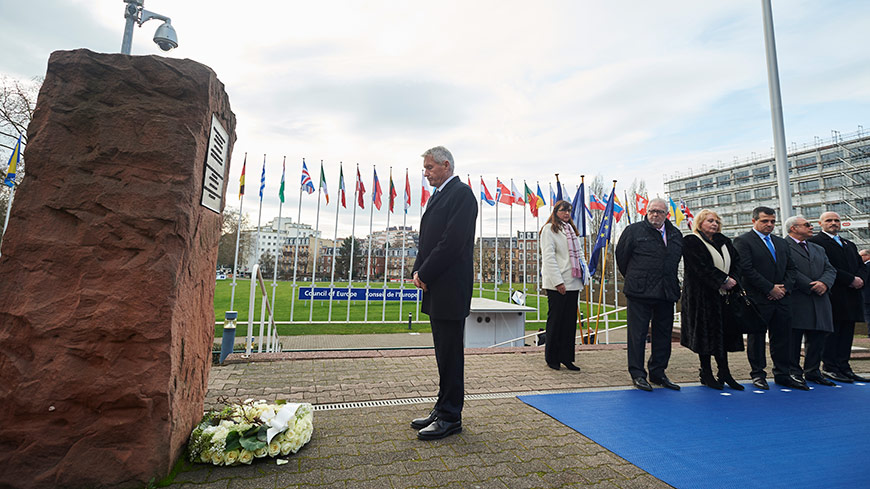 A ceremony to mark the International Day of Commemoration in Memory of the Victims of the Holocaust will take place on Wednesday 27 January, 1.00pm, on the forecourt of the Palais de l’Europe.

Wreath-laying in front of the commemorative stone or addresses by:

Deputy Secretary General Gabriella Battaini-Dragoni will open an event for schools at the European Youth Centre.

The Day is dedicated this year to the “Righteous among the Nations”.

Two exhibitions will also take place during the PACE session in the Lobby of the Assembly Chamber:

On Tuesday 27 January, the Secretary General Thorbjørn Jagland and the DG II Director General, Mrs Snežana Samardžić-Marković will participate in the official commemoration of the liberation of the Auschwitz-Birkenau camp, together with the Polish President.

27 January - A screening of a creative documentary ''KARUSSEL'' was organised in presence of the film's director, Ilona Ziok. This documentary tells the life story of the actor Kurt Gerron (who played in ''The Blue Angel'' opposite Marlene Dietrich) who was interned in the Theresienstadt camp and created a cabaret – Der Karussel – in the camp. The film re-creates this cabaret with songs sung by today's stars such as Ute Lemper, Max Raabe and Ben Becker. It has received many international documentary awards and received coproduction support from Eurimages Fund.

26 January - Women's role in the Resistance
A personal account by a survivor, performance of a play, exhibitions of portraits of women and musical interludes were on the programme during this event, jointly organised by the European Centre which commemorates deported Resistance members and the Council of Europe.

The conference will cast light on a still little-known aspect of the Holocaust, the murders between 1941 and 1944 of almost one and a half million Jews from Ukraine who were shot by Einsatzgruppen (mobile execution units) of the Waffen SS, the German police and East European collaborators.

The commemorative event will begin with a song performed by pupils from Landau (Germany). Pierre-Philippe Preux's lecture will be followed by a guided tour of two exhibitions: l'Art et la Shoah by Francine MAYRAN, an artist and psychiatrist, and l'Enfant cachée, by Hellen Kaufmann, from the association Anonymes, Justes et persécutés durant la période nazie.
Anyone wishing to attend the lecture should register, and the number of places is limited (please bring an identity document): info@struthof.fr 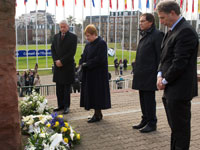 "Human rights are for all or for none," Secretary General Thorbjørn Jagland said on 25 January, when opening the ceremony in memory of the Holocaust in front of the Palais de l'Europe.

Tarja Halonen (President of Finland), Jean-Claude Mignon (President of the Parliamentary Assembly) and Doron Avital (Delegation of the Knesset to PACE) participated in the memorial service.

Wreaths were laid in front of the commemorative stone.

A ceremony marking International Day in memory of the victims of the Holocaust took place on 27 January, on the forecourt of the Palais de l'Europe. Secretary General Thorbjørn Jagland started the memorial service. Statements of respect were offered by Traian Basescu, President of Romania, Mevlüt Çavusoglu, President of the Parliamentary Assembly and René Gutman, Grand Rabbin du Bas-Rhin.