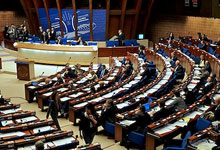 Strasbourg, 04.10.2012 – The Parliamentary Assembly of the Council of Europe (PACE) has today condemned "the continuing, systematic and gross human rights violations, amounting to crimes against humanity, committed in Syria," and called on Europe to show greater solidarity with Syrians who are victims of the conflict and the neighbouring states sheltering them.

In a resolution based on a report by Giacomo Santini (Italy, EPP/CD), the Assembly said the humanitarian situation was "becoming more and more critical" for the estimated 1.2 million Syrians who have had to leave their homes, of which nearly 300,000 are refugees in neighbouring countries. Shortages of food, hygiene products and a lack of accommodation were creating a "drastic" situation in refugee camps, it said. (more...)