A warm welcome at the Council of Europe for Little Amal 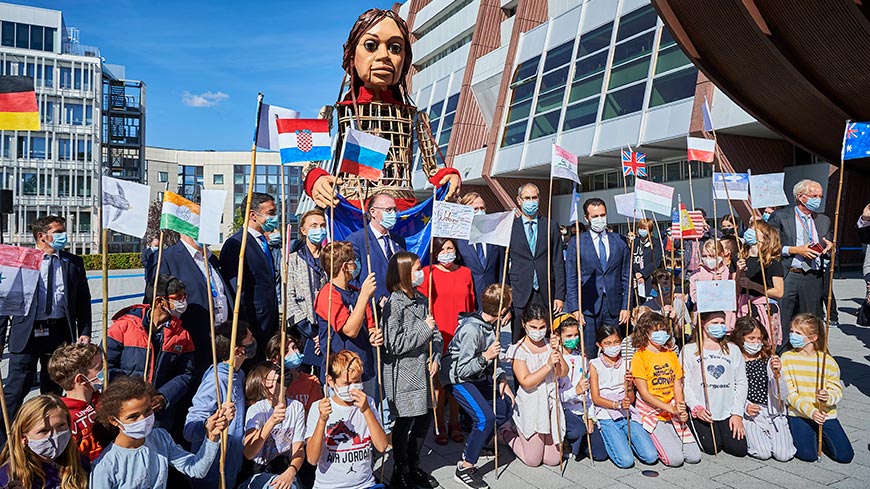 There was a warm welcome today at the Council of Europe for Little Amal, a 3.5m-tall animated puppet of a nine-year-old refugee from Syria, the latest stop on her 8,000-kilometre journey across the continent to raise awareness of the situation of child refugees.

“The Walk” is Amal’s epic voyage from the Syrian border to the United Kingdom in search of her mother, visiting towns and cities along the way in an event described by organisers as “a travelling festival of art and hope in support of refugees”. Amal means “hope” in Arabic.

She was greeted by local schoolchildren in bright sunshine on the last day of the Assembly’s autumn plenary session, before walking up to the Council of Europe building, where she was welcomed by PACE President Rik Daems and Council of Europe Secretary General Marija Pejčinović Burić, among other top officials, as well as parliamentarians from across Europe.

“As parliamentarians, my colleagues and I have a duty to protect the most vulnerable - and children like you are the most vulnerable,” said PACE President Rik Daems. “In our Assembly and our Council of Europe, we try to bring hope where there is fear. And find solutions to problems that give rise to fear in the first place.”

Amal was offered a gift of the European flag to symbolise bringing people together during her walk. She was also given a copy of the European Convention on Human Rights containing the rights that would protect her during the voyage. For her part, she offered the VIPs two of her poems, one on the need to protect the environment, the other a wish for peace for future generations.

The Little Amal puppet and “The Walk” are a joint project by South Africa’s acclaimed Handspring Puppet Company and Good Chance Theatre, which has been working with refugees since 2015.