"We are defending not only Ukraine, but also European democratic values," Kyiv Mayor Klitschko and Minister Chernyshov tell Congress 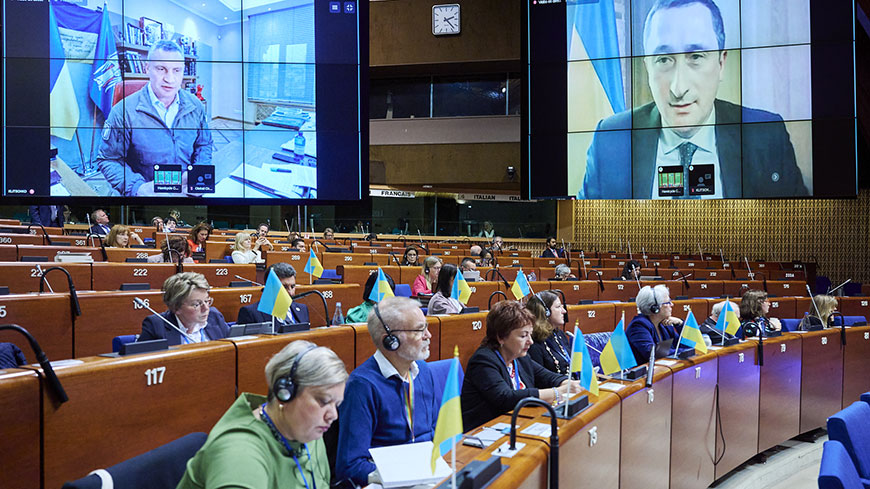 The Mayor of Kyiv, Vitali Klitschko, and the Ukrainian Minister for Community and Territorial Development, Oleksiy Chernyshov have taken part (online) in a Congress debate on Russia’s aggression against Ukraine. The debate followed the Congress' statements deploring the loss of life and destruction caused by Russian aggression and calling on the Russian Federation to immediately and unconditionally stop its war in Ukraine.

"Since the beginning of the war, thousands of civilians have been killed and nearly 8 million refugees have found themselves in Europe," said the Mayor of Kyiv. "This war does not follow any rules of international law. Russian missiles are hitting our cities without any military objective and targeting our power plants and essential infrastructure," he explained. He also recalled that more than 50 local government representatives have been kidnapped since the beginning of the war and called on the Congress to continue to support Ukrainian local governments. As President of the Association of Ukrainian Cities, he spoke of future reconstruction, saying that Ukraine was ready to work with the Council of Europe and the Congress in the framework of a "Marshall Plan".

"Our administration continues to function despite the bombings and the imposition of martial law," said Minister Chernyshov, outlining Ukraine's needs for the emergency and the medium- and long-term recovery plan. "We have our eyes on this prospect, bearing in mind the reforms needed within the framework of a state governed by the rule of law, even if for the moment the main thing is to survive," he added.

During the debate, Congress members reiterated their support for Ukraine and their solidarity with its people. They underlined the means available to local and regional authorities in member states to take concrete action, such as creating partnerships with cities and regions in Ukraine. This is the objective of the Cities4cities! platform launched, with the support of the Congress, to help Ukrainian cities. "As Europeans, we share the same values and we must demonstrate our solidarity with Ukraine, both politically and materially," Congress members concluded.