Presentation of the publication “Electoral Code of Ukraine. Book I. General part. Scientific and practical commentary" 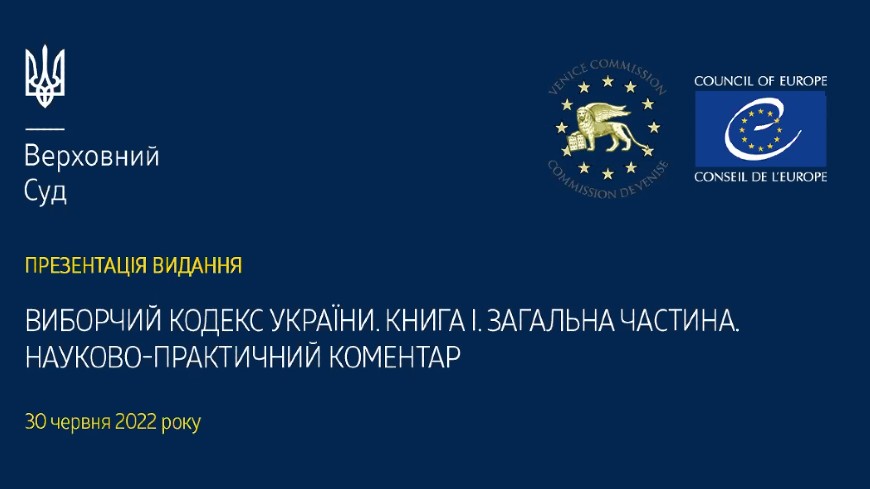 On June 30, the Supreme Court of Ukraine hosted a presentation of the publication “Electoral Code of Ukraine. Book I. General part. Scientific and practical commentary".

The presentation was attended by more than 100 judges of the Supreme Court and staff of the Court, as well as judges of district and administrative courts of appeal.

Scientific and practical commentary to the Book 1 of the Election Code of Ukraine (General Part) was prepared by national experts in the field of suffrage, headed by Doctor of Law Yurii Klyuchkovsky during 2021.

The scientific and practical commentary to the Book 1 (General Part) of the Electoral Code of Ukraine reveals in detail the main provisions of the electoral legislation of Ukraine. The content of the basic principles of suffrage, subjective, procedural and temporal aspects of the electoral process is explained. The principles of institutes of election administration bodies, voter lists, election information support and election campaigning, election observation, and appeal of election offenses were analysed in detail.

The commentary is intended for participants of the election process, members of election commissions, judges of administrative courts, scholars, teachers and students of law and political science faculties of higher education institutions.

Mr. Mykhailo Smokovych, Chairman of the Administrative Court of Cassation of the Supreme Court, thanked all the co-authors of the scientific-practical commentary on behalf of the judiciary. He stressed that the courts in cases related to election disputes have always received special attention from both the Ukrainian society and the international community. He also expressed confidence that this scientific-practical commentary would soon become an important and convenient support tool for judges in solving election disputes.

In his introductory speech, Mr. Steen Nørlov, Head of the Council of Europe Office in Ukraine, said in particular: “As you know, this presentation was to take place in February this year. However, the war waged by the Russian Federation against Ukraine prevented this. But this did not diminish the importance of the approaches and conclusions of this expert work. We all know that elections are an instrument of peace. However, we must already think about the risks this war has brought to the future electoral process. We already need to talk, think, analyse the ways of development of electoral legislation and practices that need to be implemented after the victory of Ukraine in order for it to meet the main principles and standards of the Council of Europe and the best European practices."

This was the first in a series of presentations of this scientific and practical commentary. The authors of the publication, with the support of the Council of Europe Office in Ukraine, plan to hold a series of similar presentations for partners, experts, the scientific community and other target audiences.

The publication "Electoral Code of Ukraine. Book I. General part. Scientific and practical commentary” is available through the following link https://rm.coe.int/viborchiy-kodeks-komentar-2web/1680a71468