Detecting, documenting and investigating torture and other gross human rights violations at the time of war: online workshop for SBI investigators and OPG prosecutors 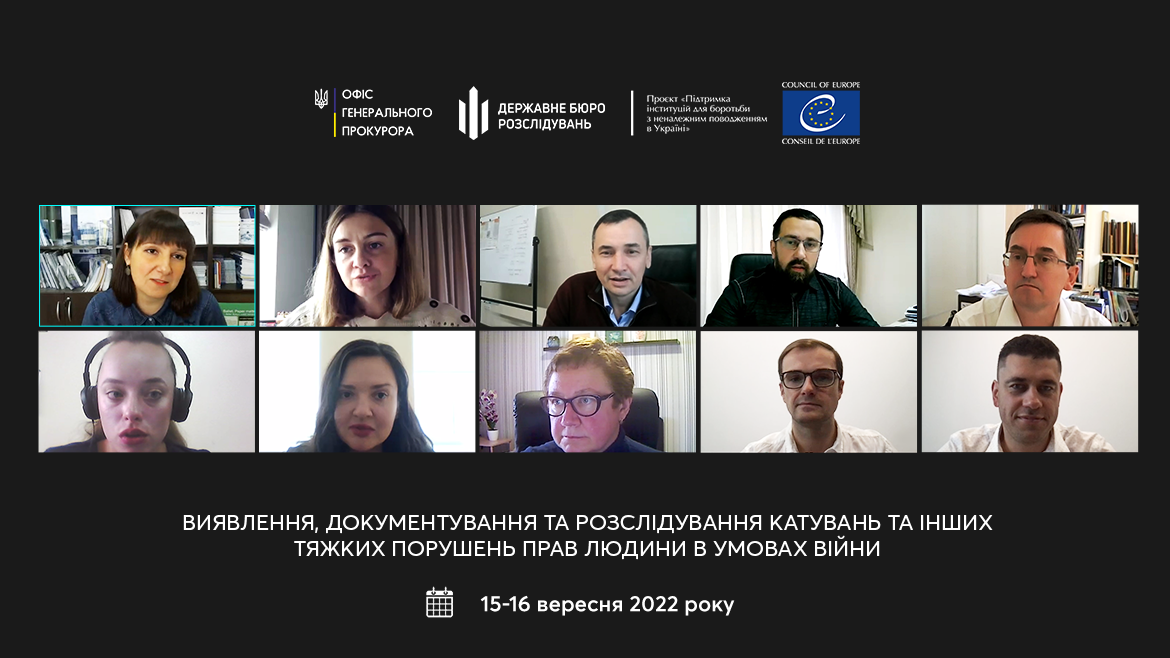 The two-day online workshop for investigators of the State Bureau of Investigation (SBI) and prosecutors of the Office of Prosecutor General (OPG) on specifics of identifying, documenting and investigating gross human rights violations, particularly torture, during armed conflict, wrapped-up today. During the workshop some 80 participants and Council of Europe experts covered the following:

“War has a dynamic nature. In recent days, we rejoice in liberation of a number of territories. However liberated territories have to be worked through. We need theoretical and practical knowledge on documenting criminal offenses committed on those liberated territories, as these were under occupation for quite a long time. We have reasonable suspicion that many crimes were committed there. It is necessary to rapidly respond to the challenges we face. We need deepened knowledge of international humanitarian law, understanding which actions are criminal and which are not; what circumstances are subject to proving in this or that case; what tools we need to apply to document certain offenses. Without this, we run the risk of misusing our already enough limited resources. We are very lucky with trainers engaged in this workshop because they keep up with the times in practical, not only theoretical, dimension and advise solutions for emerging challenges we all face” – Mr. Taras Semkiv, Deputy Head of the Department for Combating Crimes Committed During Armed Conflict of the Office of the Prosecutor General.

“Ukraine is currently in outstanding conditions in all spheres of life, and law enforcement agencies are no exception. Our Department has been involved in investigation of respective crimes from the very first days of the war. Prosecutors of the Department took part in crime scene inspections, appointed examinations, interrogated witnesses, conducted other procedural actions in the affected localities, such as Bucha, village Havronshchyna, Vyshgorod district. Therefore, it is very important to gain additional knowledge in this field of expertise. For many prosecutors this was their first war-stipulated experience” – Mr. Oleh Duka, Head of the Department for Combating Human Rights Violations in the Law Enforcement and Penitentiary Spheres of the Office of the Prosecutor General.

“Today, significant part of the previously occupied territory of Ukraine has been liberated. Our citizens are there, and they were under occupation for quite a time. Bloody trail was left on all these territories: settlements, civil infrastructure facilities, residential buildings, hospitals, schools were completely destroyed; facts of torture, murder of civilians, Ukrainian prisoners of war have been revealed. All law enforcement agencies, including the SBI, investigate the crimes committed by invaders. The society expects that the aggressor's responsibility for committing war crimes shall be inevitable. The completeness of trial will depend on methodological consistency, thorough collection and preservation of evidence, with due account to modern investigative practices and provisions of international humanitarian law” – Mr. Serhii Kostin, Deputy Head of the Main Investigative Department of the State Bureau of Investigation.

The workshop was held within the framework of the Council of Europe project “Supporting Institutions to Combat Ill-Treatment in Ukraine, Phase II” in cooperation with the OPG and the SBI.