Freedom of Media in Ukraine

The Project “Freedom of media in Ukraine”, implemented within the Council of Europe (CoE) and European Union (EU) Programmatic Cooperation Framework (PCF) is aimed to improve freedom, independence, pluralism and diversity of media in Ukraine.

The Law on audio visual services is a key law for the media sphere and according to EU-Ukraine Association Agreement Ukraine should gradually approximate its legislation on audio-visual policy within 2 years of the entry into force of this Agreement. The law will replace the Law on Television and Radio Broadcasting and the Law on the National Television and Radio Broadcasting Council of Ukraine. The draft Law has been developed with support of CoE pervious projects and is expected to be tabled and reviewed by the Parliament in 2016.

Community media, mostly TV and radio, established and controlled by a community, either a geographic or a community of identity or interest are an important tool for informing citizens at the local level in CoE member states. Unfortunately, development of the community media in Ukraine is at the initial stage.

In April 2014, the European Union and the Council of Europe agreed in a Statement of Intent that targeted cooperation activities with Armenia, Azerbaijan, Georgia, Republic of Moldova, Ukraine and Belarus - the EU’s Eastern Partnership countries - would be implemented under a ‘Programmatic Cooperation Framework’ (PCF).

These cooperation activities intend to strengthen the capacity of Eastern Partnership countries, which are the member states of the Council of Europe, with the exception of Belarus, and to implement domestic reforms to bring them closer to the standards of the Council of Europe and the European Union in the fields of human rights, democracy and the rule of law.

The total budget of the Project is 177 thousand euro. The project is financed by the European Union and implemented by the Council of Europe.  The project implementation period is 1 January - 31 December 2016. 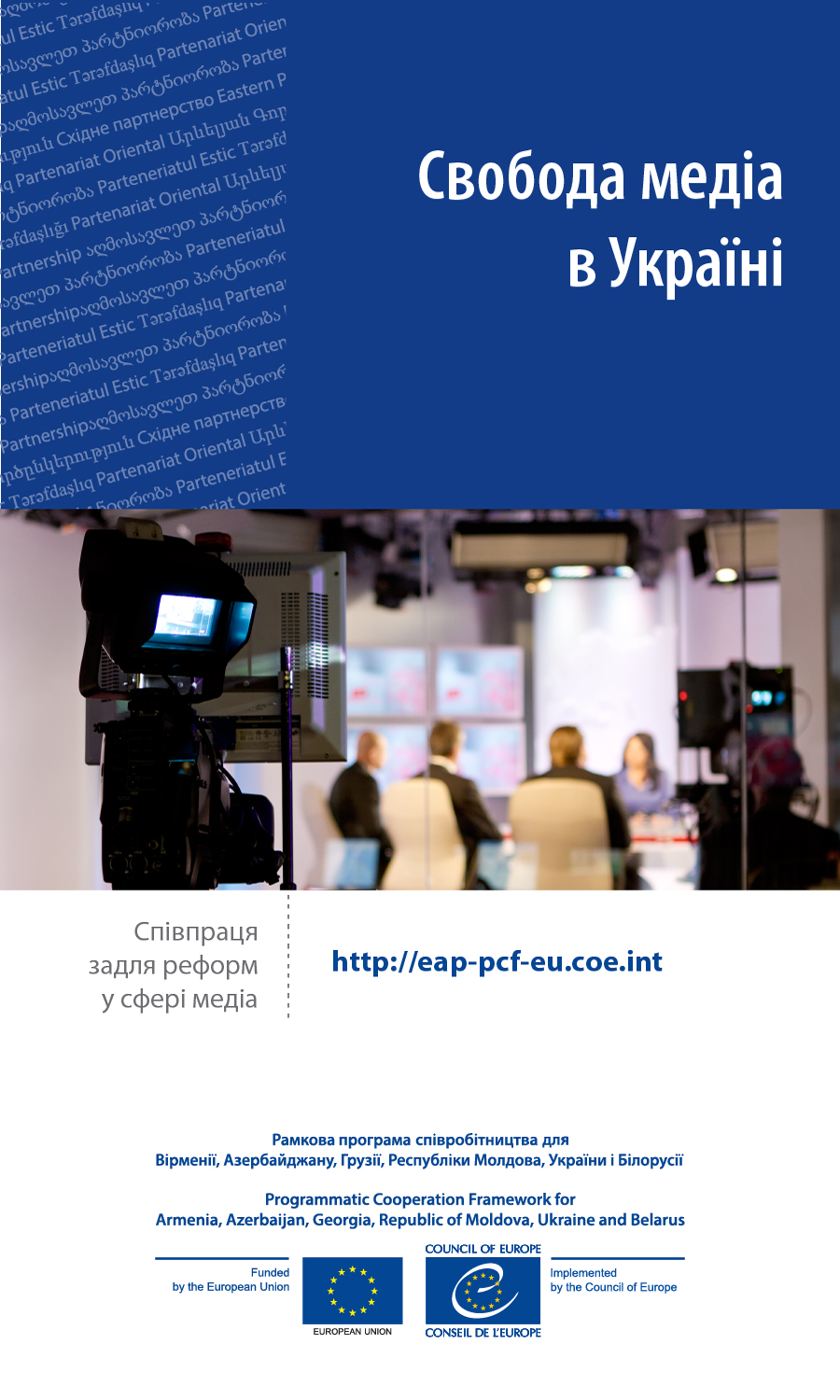 Statement by the Council of Europe Commissioner for Human Rights STRASBOURG 2 MAY 2022 ...
View »

The news is available in Ukrainian only. Please switch to the Ukrainian version of the page in the top left section of the web-page. ...
View »

Call for tender – Purchase of national consultancy services for carrying out training activities on criminal legal protection of journalists and other media actors for police officers, prosecutors, judges and developing online course on digital safety for journalists

Call for tender - purchase of services on monitoring the media coverage of 2019 presidential electoral process in Ukraine for the Council of Europe Projects “Supporting the transparency, inclusiveness and integrity of electoral practice in Ukraine” and “Strengthening Freedom of Media, Access to Information and Reinforcing Public Broadcasting System in Ukraine”

Press announcement. Invitation to take part in the seminar on protection of the professional activity of journalists

ROUND TABLE “FREEDOM OF SPEECH IN UKRAINE: CURRENT STATUS AND CHALLENGES” ON MAY 3, 2018