“War is the greatest challenge for both the whole Ukraine and national minorities”: activists and human rights defenders provided recommendations for the Recovery Plan of Ukraine 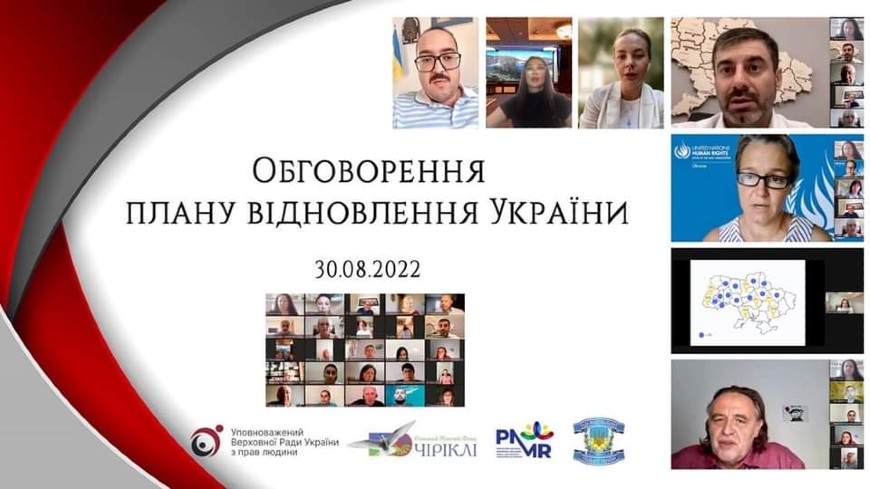 On 30 August 2022, with support of the Council of Europe project “Strengthening the protection of national minorities, including Roma, and minority languages in Ukraine”, the Ukrainian Parliament Commissioner for Human Rights held an online round table “Formation and implementation of state policy on protection of the national minorities’ rights, including Roma, under martial law”*.

The event aimed to discuss the current state of protection of the national minorities’ rights and prepare proposals for the draft Recovery Plan of Ukraine, namely the “Human Rights” section.

“A separate department has been created in the Office of the Ombudsman of Ukraine, which will deal with issues of national communities and indigenous peoples. Indeed, today the war is the biggest challenge both for the whole Ukraine and for national communities. Many representatives of the national communities were forced to leave their places of compact residence, some could not escape from the occupied territories and are waiting for Ukraine to return.

Cultural organizations of national communities, religious buildings, monuments, etc., also suffered significant damage. A vivid and sad example is Mariupol, where the Greeks of Pryazovia lived. The city has been completely destroyed as well as the Greek cultural center “Meotyda” and the Mariupol State University,” noted Dmytro Lubinets, opening the round table session.

72 representatives of national communities, regional and local authorities, as well as international organizations participated in the round table. In particular, ICO Chiricli and CSO Council of National Communities of Ukraine were involved in the preparation of the meeting.

The participants of the event emphasized the importance of discussing the draft Recovery Plan of Ukraine, and in particular the “Human Rights” section. They also noted that even during the war, the state found an opportunity to hold discussion with national communities.

“Military actions negatively affected the lives of representatives of national communities and indigenous peoples of Ukraine, who lived in the eastern and southern regions of Ukraine. Part of these territories is temporarily occupied, and active hostilities are also taking place there.

At the same time, mass internal displacement and emigration significantly affect the ethnic identity of the regions. War increases the vulnerability of already vulnerable population groups, deepens inequality, and limits the possibility of equal access to their rights and certain services,” emphasized Zemfira Kondur, moderator of the meeting and Senior Project Officer of the Council of Europe project “Strengthening the protection of national minorities, including Roma, and minority languages in Ukraine”.

According to the results of the meeting, the following recommendations and proposals for the Recovery Plan of Ukraine, namely the “Human Rights” section, were offered.

Population census. This is a problem for both the state and representatives of national communities. Accurate statistics is extremely important for Ukraine's recovery planning. Population census should create a broad profile of ethnic picture as well as demographic, social and economic statistics across the country, which are an important basis for good governance and decision-making.

At the same time, this census should not be considered as a separate national task. It should have a broader international perspective. It will help the geopolitical and geoeconomic positioning of Ukraine in the future.

It is worth paying attention to such documents as, for example, the Dayton Peace Agreements (Bosnia and Herzegovina), the Ohrid Framework Agreement (Macedonia and Albania), and Kosovo.

“It is important not to plan separate reservations for national communities, especially for Roma, when planning the restoration of cities and settlements. For many years, the public fought for integration, in particular, when there was a reform of local self-government. Now is the time for it. Even a compact settlement must be immanently implemented in the development of the entire city, having the same infrastructural and communicational opportunities, road, heating, etc.” explained Larysa Kobelianska, Head of the Public Council for Gender Issues under the Inter-Fractional Association “Equal Opportunities”.

Civillian support. For the successful implementation of the Plan, relevant institutions and adequate political and civil society support must be created. A formal reference to ethnic issues or minority rights is not enough.

Work with temporarily occupied territories. Currently, it is very difficult to talk about human rights and rights of national minorities in the occupied territories. However, it is necessary to provide an effective mechanism for documenting crimes, their classification, professional terminology, in order not to record these facts later “retrospectively”.

It also is important to simplify the procedures for people without identification documents – Roma, or those who lost their documents because of the destruction of their own house.

In addition, the participants of the event emphasized the importance of disseminating information about the evacuation and humanitarian support program for ethnic groups of Ukraine from their historical homelands.

Therefore, the proposals and recommendations voiced during the event will be processed by the Secretariat of the Commissioner for Human Rights and sent to the Cabinet of Ministers of Ukraine.

*The information material is prepared within the framework of the project “Strengthening the protection of national minorities, including Roma and minority languages ​​in Ukraine”, which is based on the specific recommendations of two monitoring bodies of the Framework Convention of the Council of Europe on the Protection of National Minorities and the European Charter of Regional or Minority Languages. The project started in March 2018 and is part of the Council of Europe Action Plan for Ukraine for 2018-2022.

The views and opinions expressed in this publication do not necessarily reflect the official position of the Council of Europe.